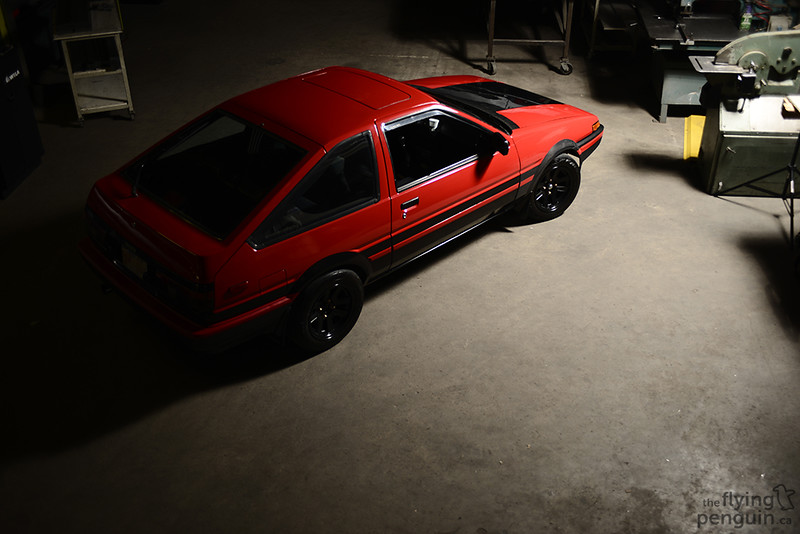 These days it takes a certain flair to be original; everyone’s trying to do the next big thing, trying to stand out and be different, but ironically it’s exactly that that causes most people to blend right back in. 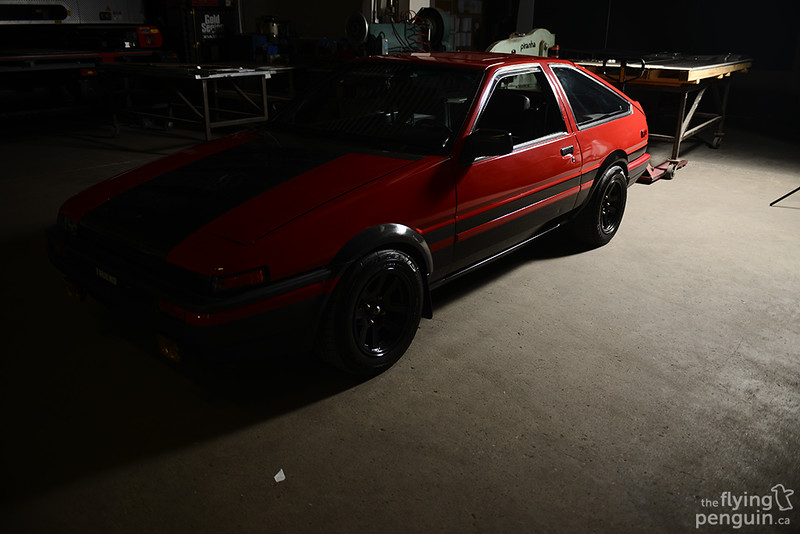 If you have a blank canvas in front of you that means you are free to create whatever you want, not what everyone else wants you to create. 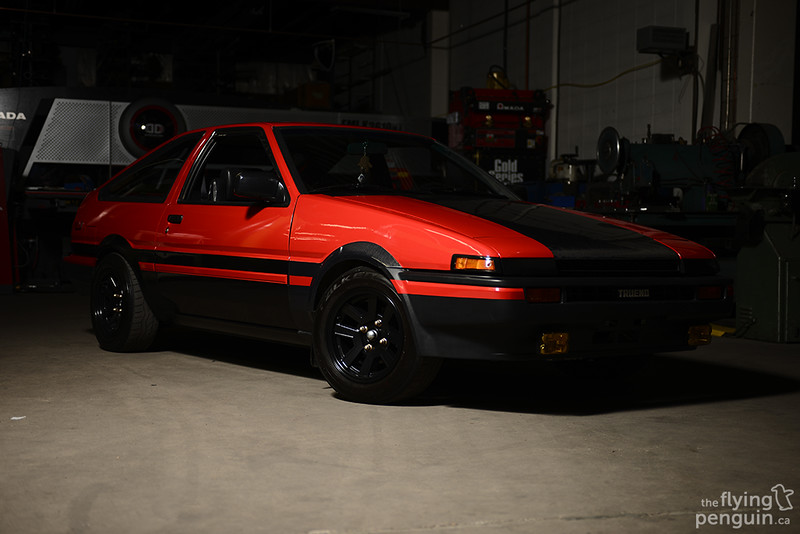 But what if you’re starting off with a classic such as the legendary Toyota AE86 Corolla? There’s the argument of preserving the iconic car as it once was, but then again there’s the option of creating something new, something fresh, and most of all, something that you can call yours. Say hello to Matthew’s 1987 Toyota Corolla GT-S. 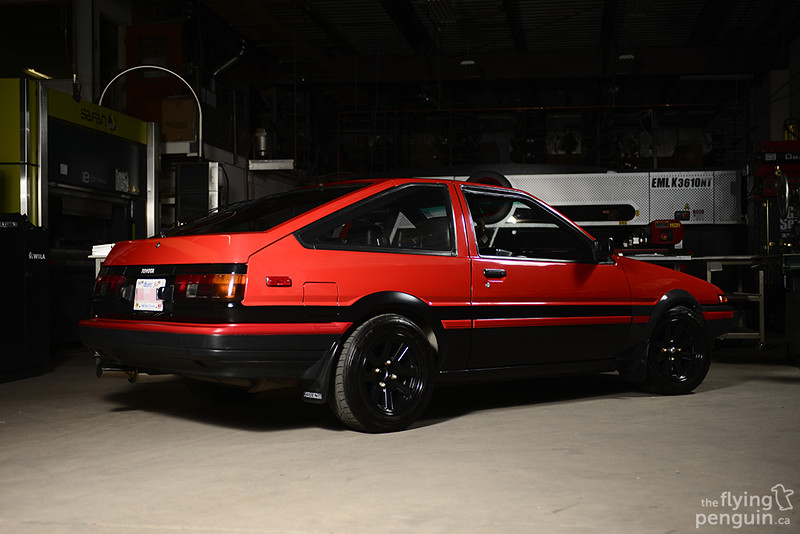 This car is no stranger to the FlyingPenguin blog as we have seen it many times before. I even spent a fair amount of time working on the car myself helping to get it ready for the Driven Calgary show. Considering that I’ve been up-close and personal with this car so many times, I can honestly say that no corners have been cut, no expenses have been spared, and a huge amount of both love and passion has gone into this car to bring it to where it is today. 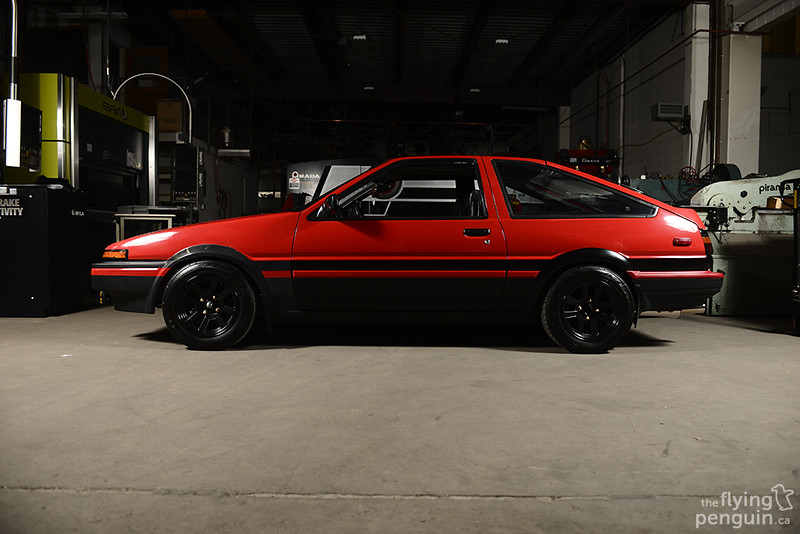 Wanting to stay true to the original AE86 look, Matt opted for the OEM JDM conversion consisting of zenki front and rear bumpers and signal lights. 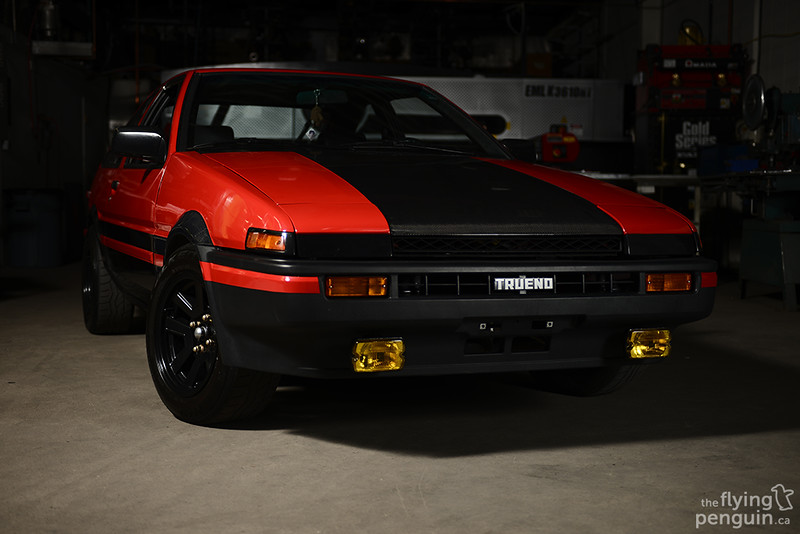 This theme continues on with the subtle touches added by the JDM Trueno badge, mudflaps, Sprinter Trueno taillights, and the Cibie Airport foglights up front. 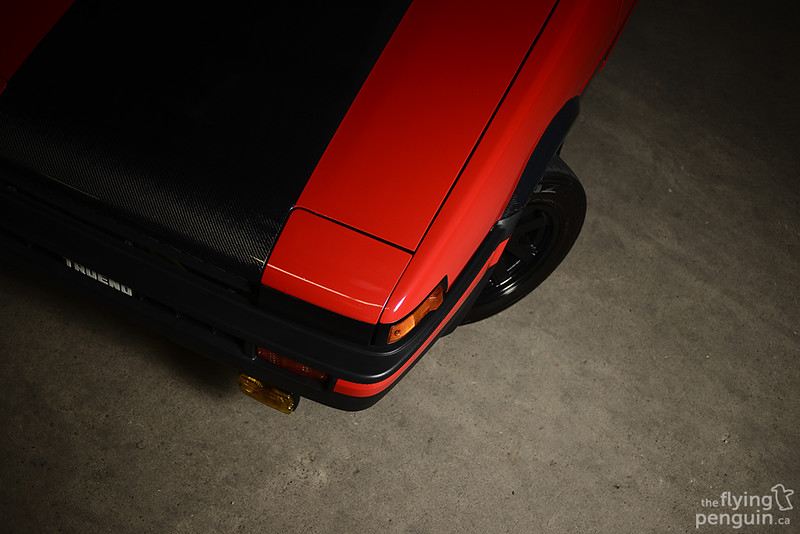 Now of course we like to have a little fun with our cars, so not everything is completely original. Keen eyes will notice the Advan carbon fiber hood… 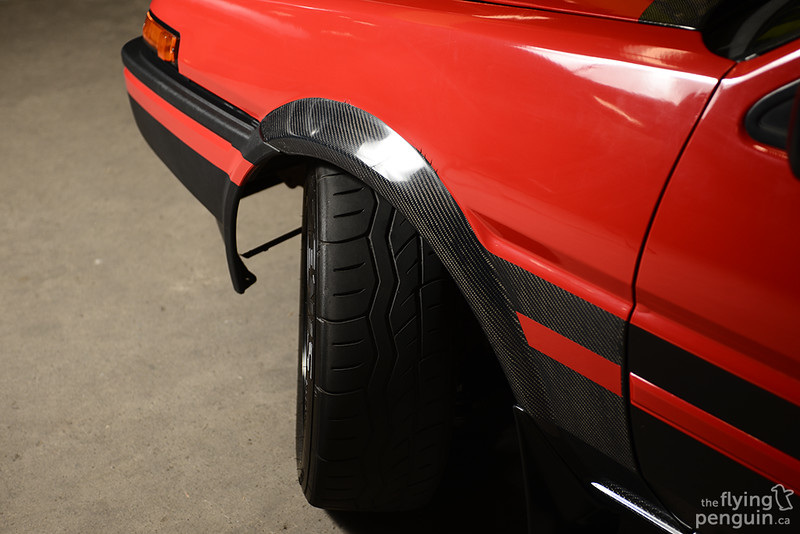 …as well as the Modiride carbon fiber fenders up front. As you can see there are red accents on both the carbon pieces and that’s because this car has been entirely wrapped in a red and black vinyl from top to bottom. 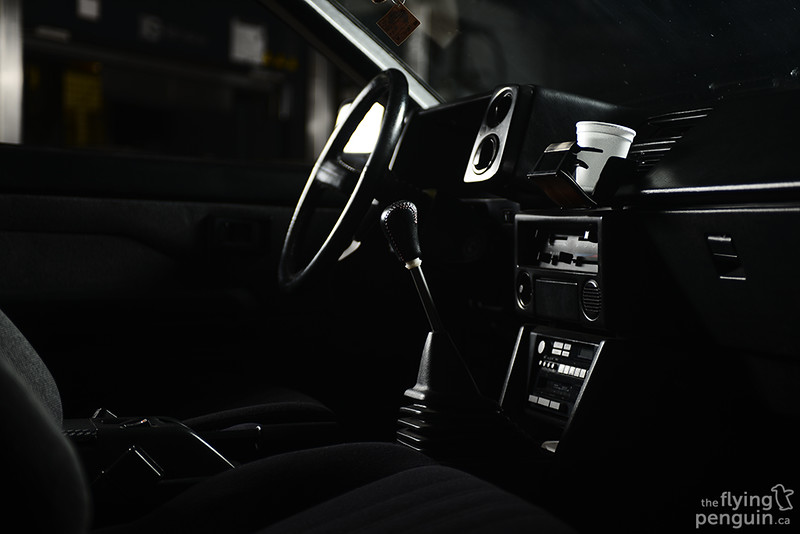 The original theme carries on into the interior were everything is 100% OEM right down to the radio and cassette player. The only thing that’s been changed is the extremely tall T3 extended short throw shifter and TRD shift knob. 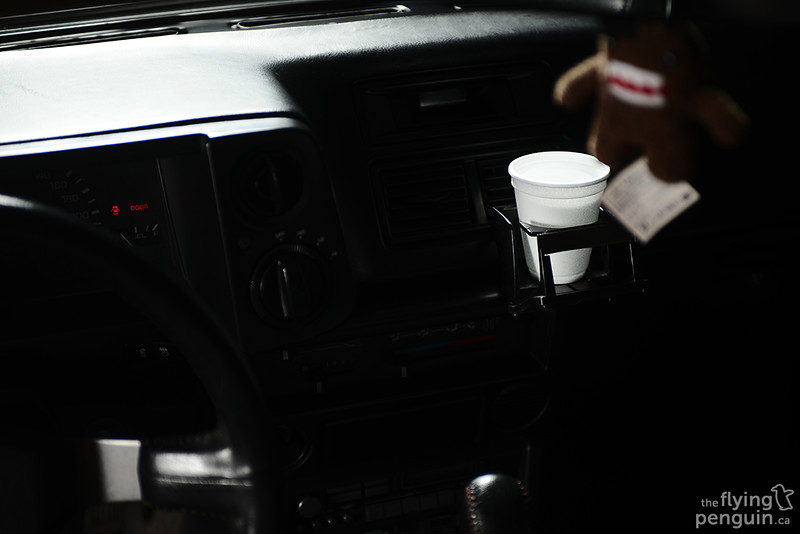 If anything the Styrofoam cup would have to be my favourite addition to the cabin. You all know why it’s there! 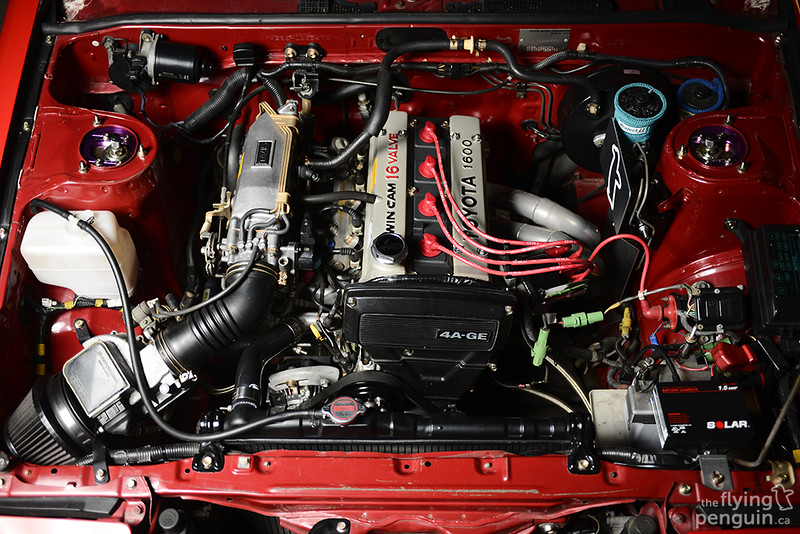 Of course the AE86 has always known to be a “drivers” car, so don’t think for one second that this pretty face isn’t without a soul. Just don’t expect to an SR20 or big LS V8 swap here though. At the heart of it all is the original 16 Valve 4A-GE that we all know and love. 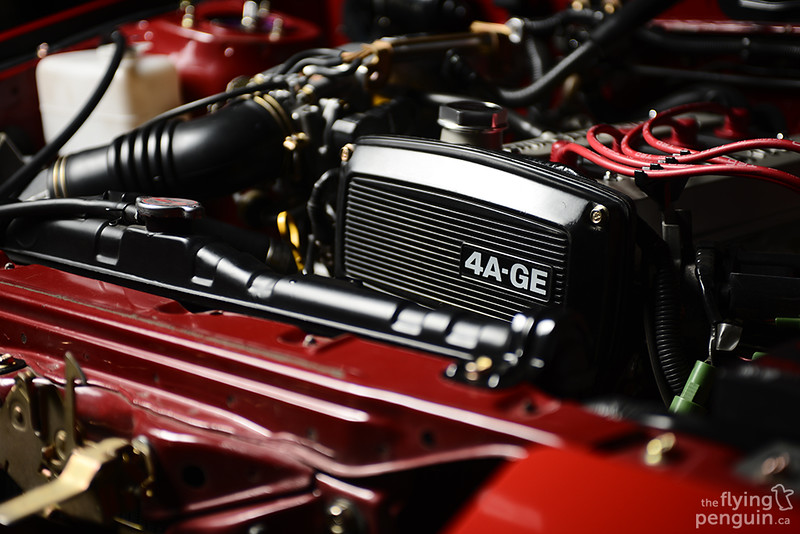 Upon startup you’ll notice the extremely lumpy idle which is due to the Colt Cams Stage III intake and exhaust camshafts that are then mated to Fidanza cam gears. Once the throttle opens up that unmistakable exhaust note comes to life thanks to the OBX Tri-Y headers and Brave 60mm cat-back exhaust. 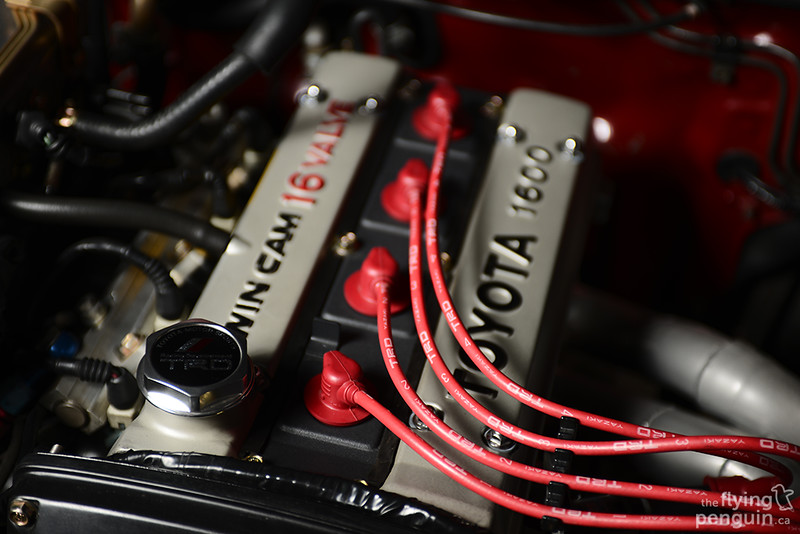 To help spice things up a bit, a plethora of TRD goodies can be found in the form of spark plug wires, oil cap, and a radiator cap. The transmission has also been treated to a Weir 4.11 FD, and then everything sits 10mm lower after they’ve been mounted up to the Techno Pro Spirit engine and tranny mounts. 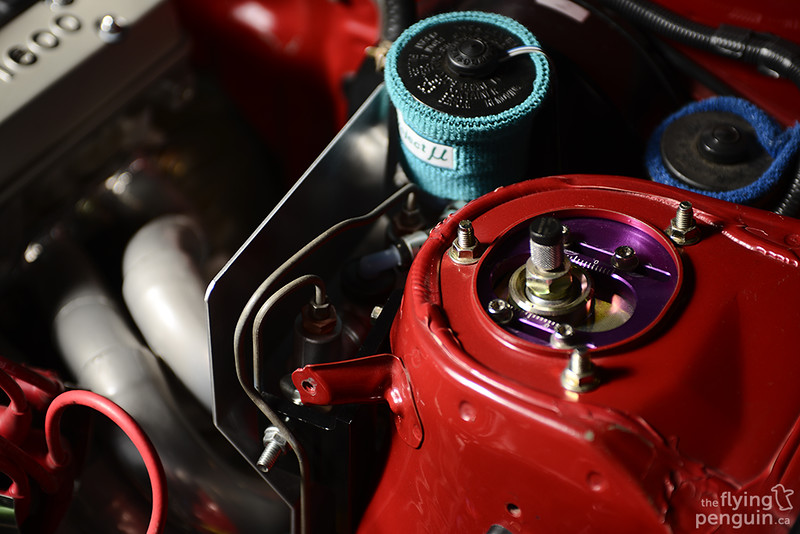 One quick peek through the strut towers and you’ll instantly notice the GReddy coilovers. The rest of the suspension has been given attention as well in the way of a Kaaz 2-Way LSD, a Cusco Panhard Rod, T3 RCA’s and traction brackets, Megan inner tie rods, and an AW11 manual steering rack. It’s all then topped off a complete polyurethane bushing kit for that added rigidity. As we know, Corolla’s aren’t particularly powerful cars, but rest assured these additions to the suspension make for quite the fun ride. 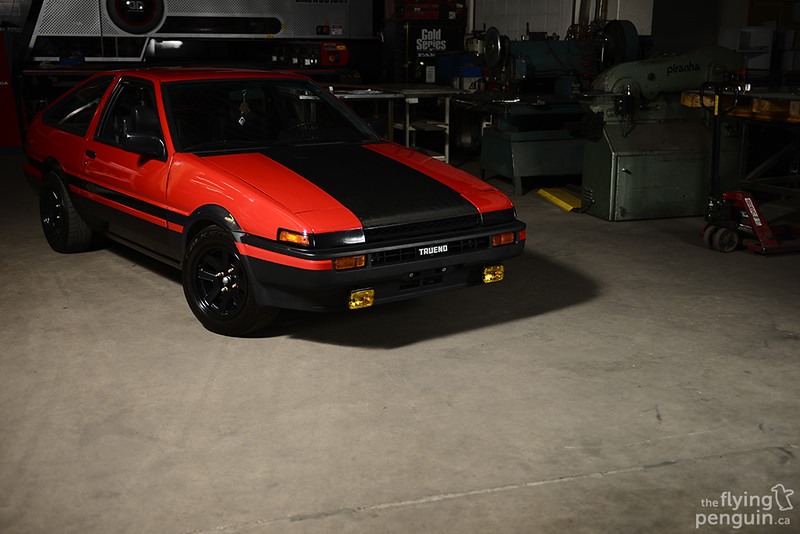 That’s probably the most import aspect about this car right there: fun. It’s not fast, it’s not powerful, but it’s fun. It will put a smile on your face whether you’re going for a drive or just standing there admiring the view. 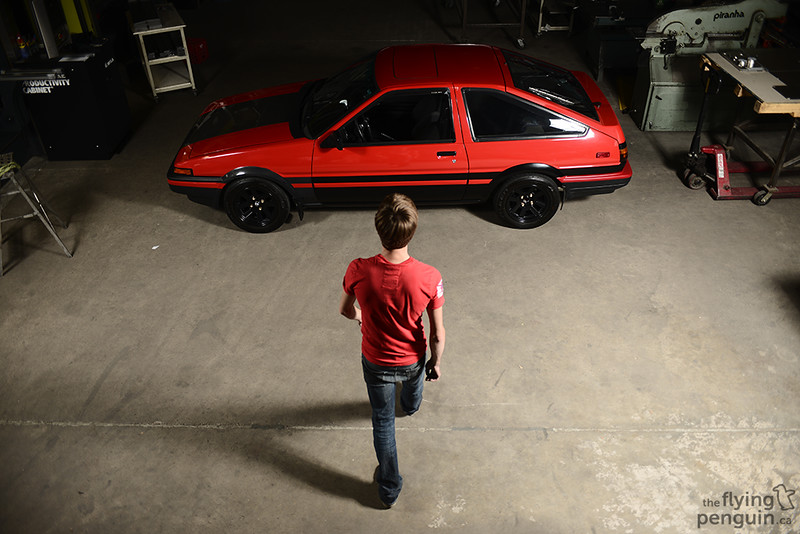 So what does it take to be original? Does it mean to be totally out there and do something that no one else has? The future is not a straight line, so chose your own path. Just remember, there is no right or wrong path; just the one that you think is best for you.