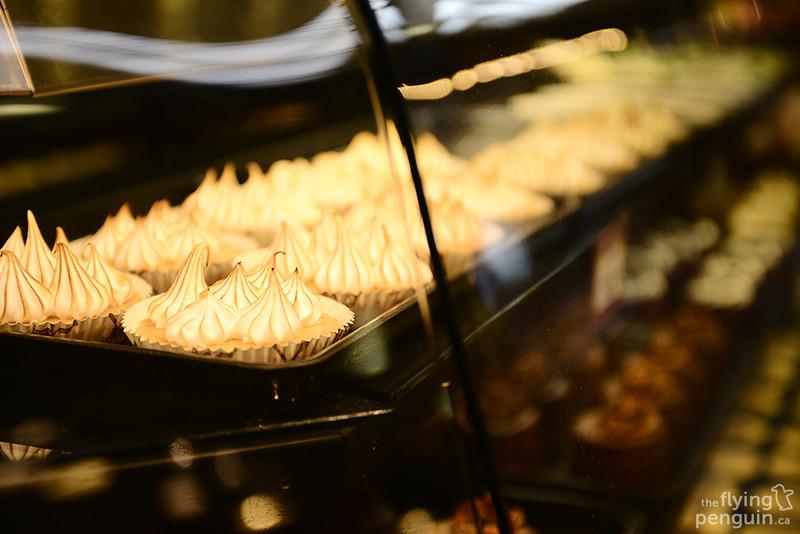 No matter where I travel, I always make it a point to try new foods/restaurants in the area. After all, you never know what you’ll find! 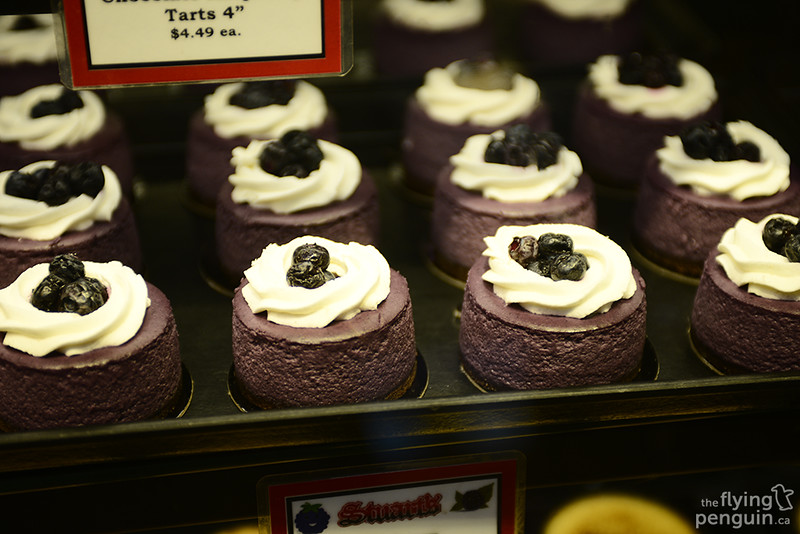 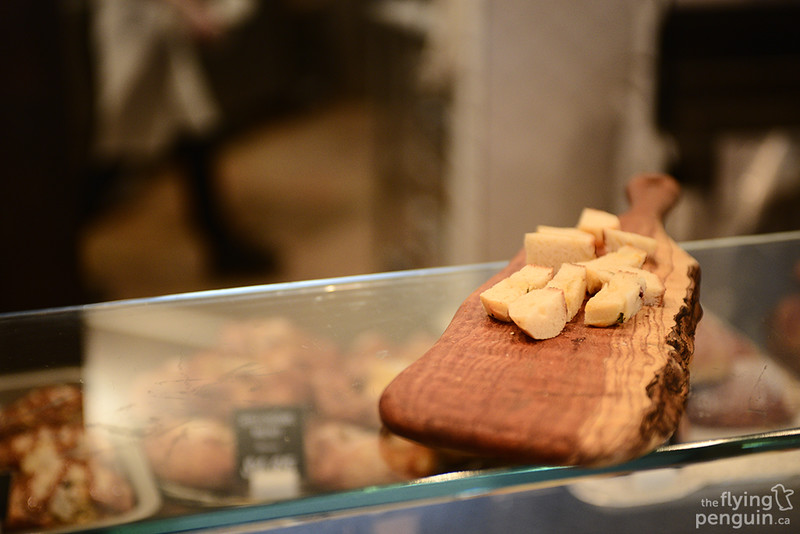 …but one place I definitely recommend checking out is actually not inside the market halls, but rather just outside. A Bread Affair offers what has got to be some of the freshest and interesting flavours of bread that I’ve ever had. Sadly this is the only photo I snapped while I was there. 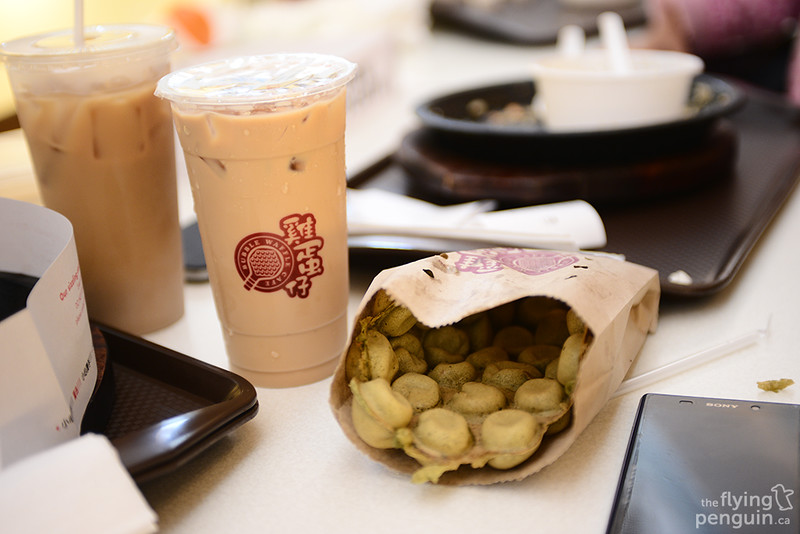 A good friend of mine suggested that I try some green tea flavoured egg waffles (which were absolutely delicious by the way) from Bubble Waffle Café inside Aberdeen Centre. Although I’ve been to Aberdeen and have seen this place many times, I never knew that they offered different flavours of egg waffles. It was so good and I’ll be sure to try the other flavours next time! 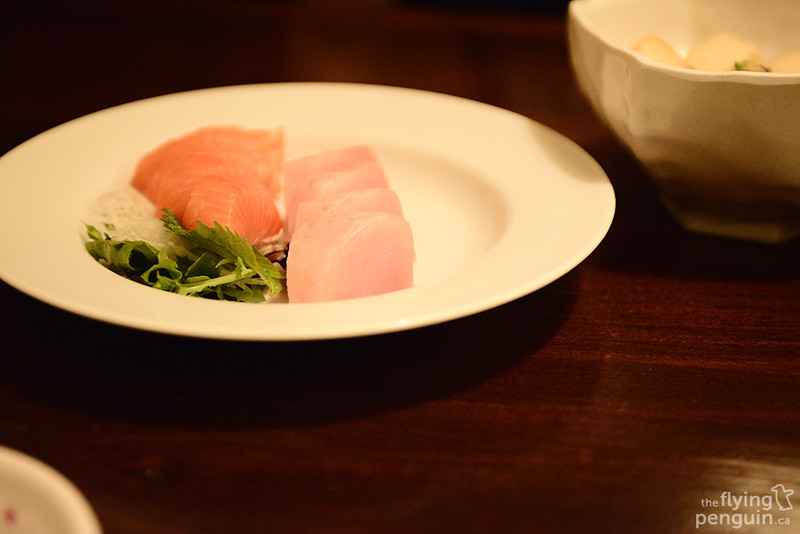 We stopped by Sushi Mori in Langley again for a late night dinner one night. 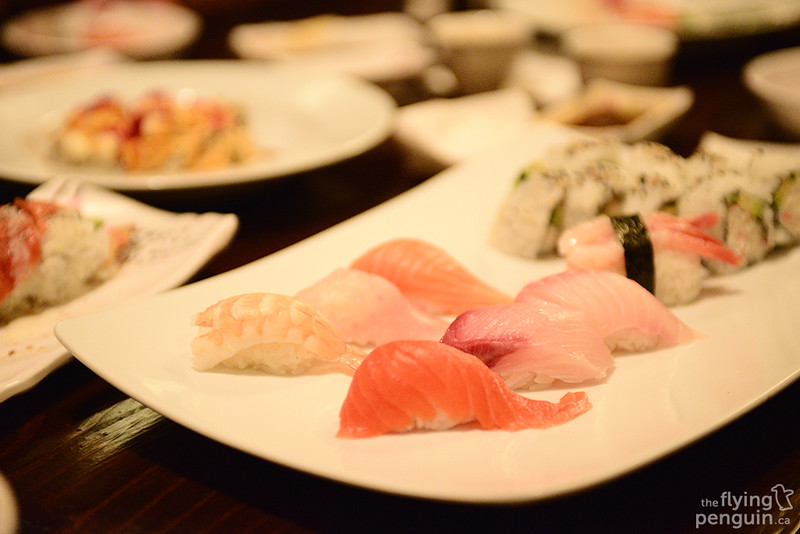 Unfortunately I was feeling really under the weather… 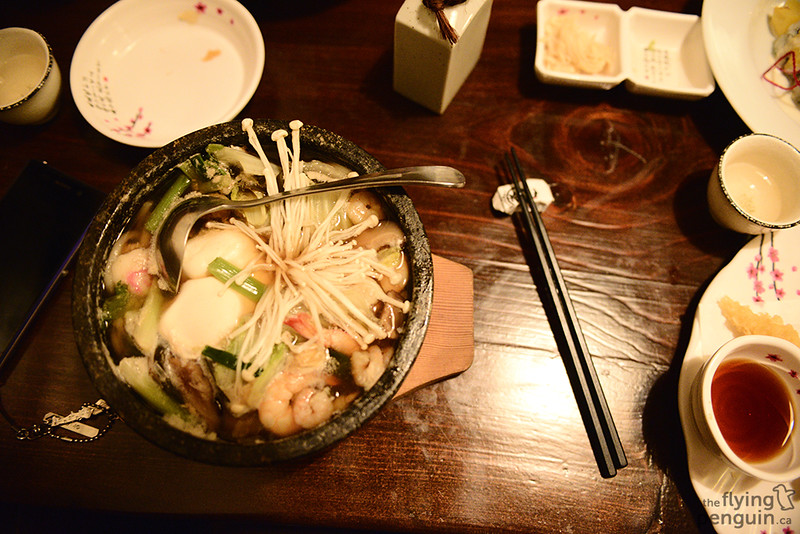 …but that meant that I was really in the mood for a nice hot bowl of nabeyaki udon (udon noodles with seafood, vegetables, and tempura)! 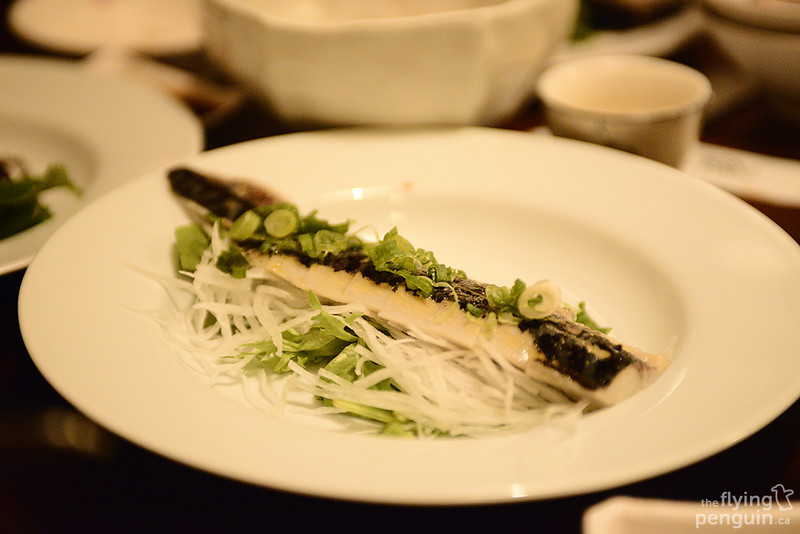 On a side note, this is THE biggest aburi saba (flamed seared mackerel) that I have ever had. 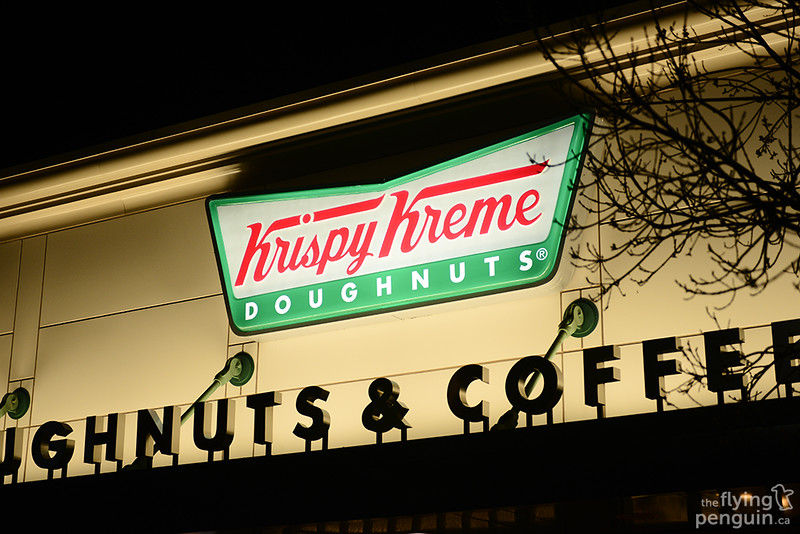 We just happen to stumble across a Krispy Kreme in Delta one night which was quite the pleasant surprise. We knew immediately that we had to go inside to investigate. 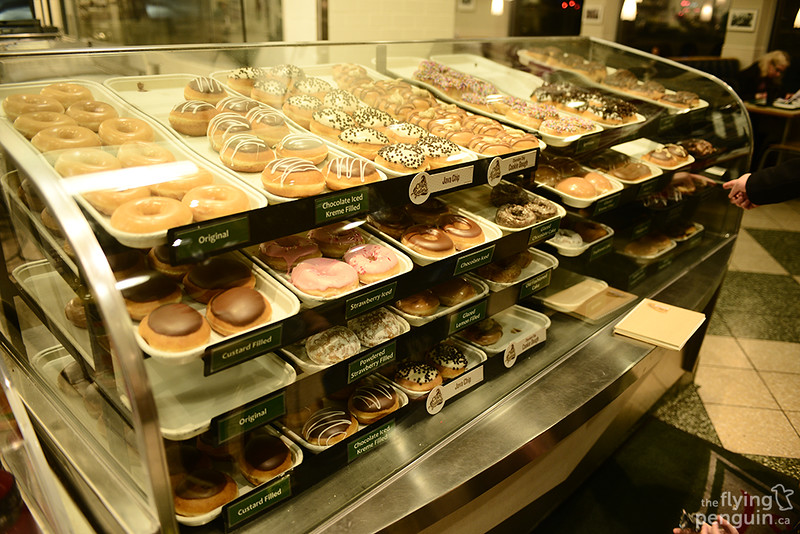 Krispy Kreme in Calgary closed up years ago so Albertans have been deprived of these soft and flavour-filled donuts. 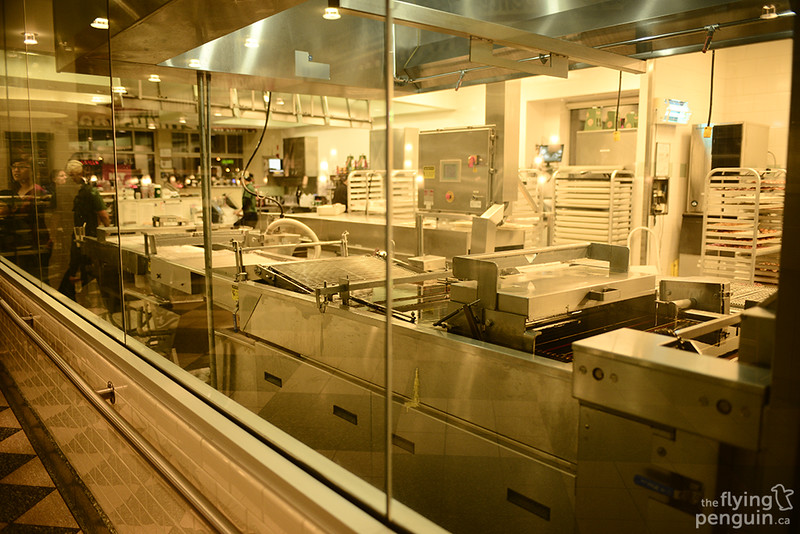 They make their donuts fresh twice a day (I forgot during which hours) and you can see everything being made right before your eyes, sort of like a gigantic mini-donut maker. 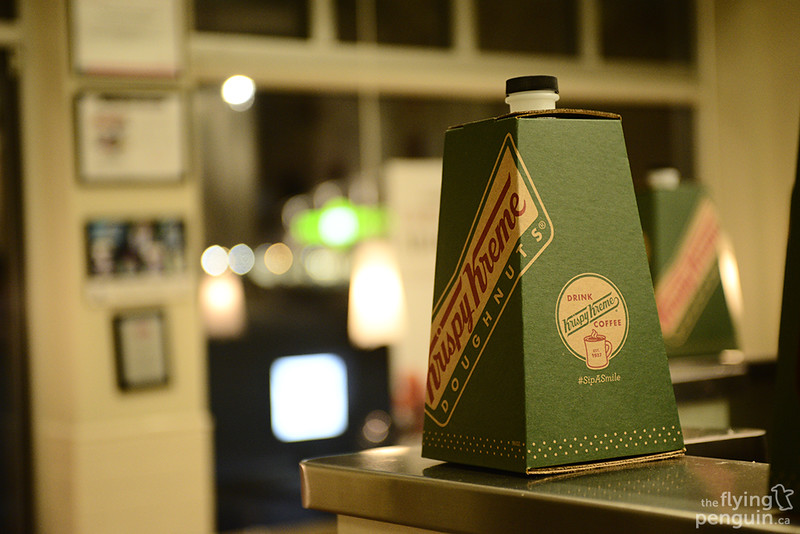 It’s been more than ten years since I’ve last had a Krispy Kreme donut; I didn’t even know that they sold coffee! 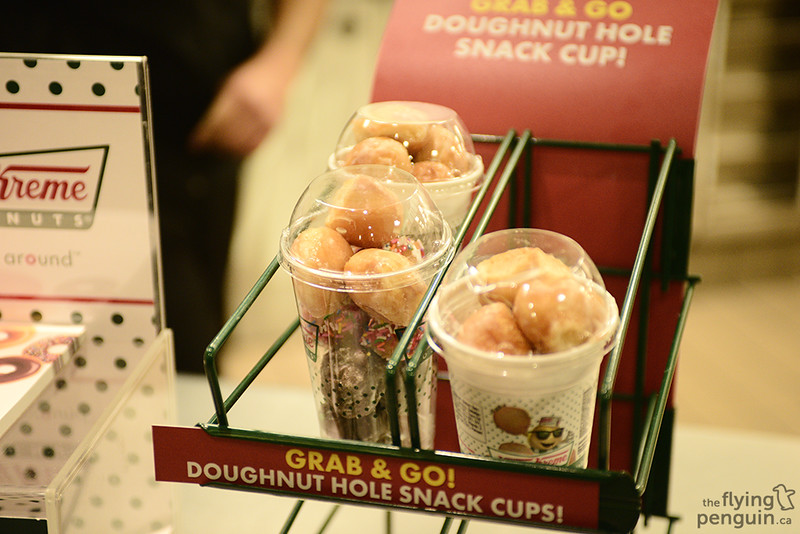 They even have Timbits (although I’m sure that’s not what they call them)! 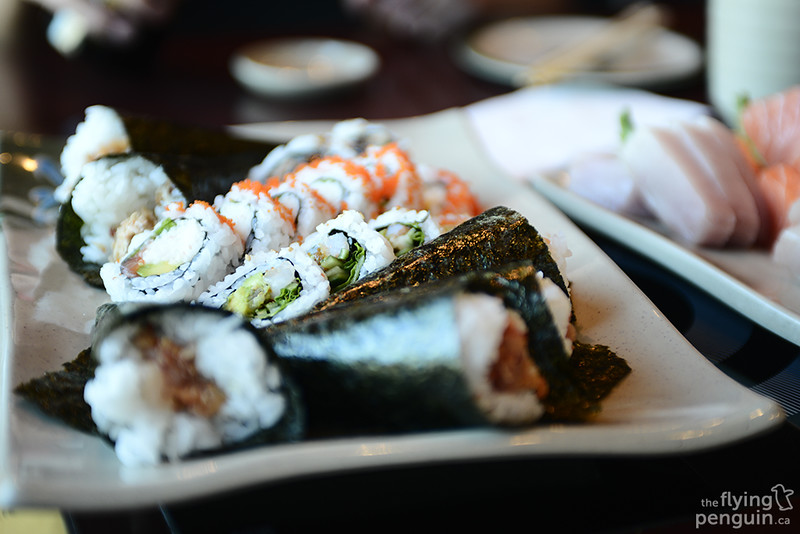 I think it’s pretty obvious that I love my sushi, but anyone that knows me knows that I generally stay away from all-you-can-eat sushi. 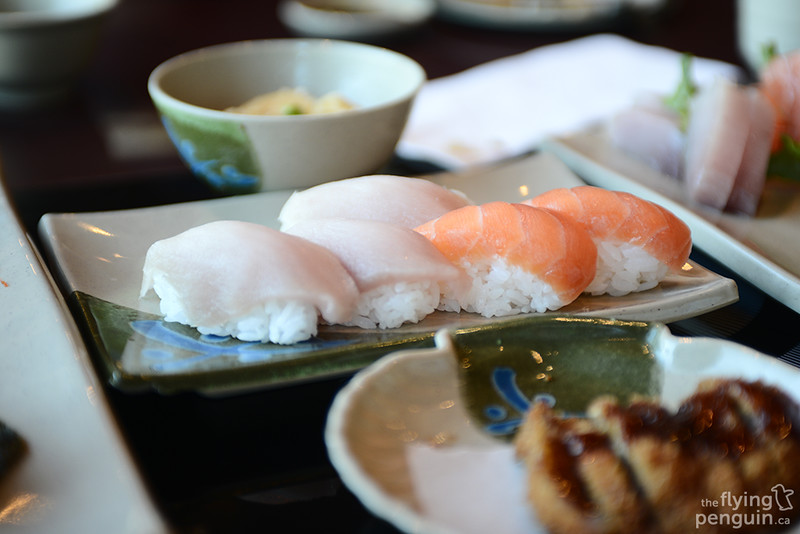 There’s nothing wrong with it, you won’t get sick nor will it kill you if you eat it; my issue with all-you-can-eat sushi is the way that it’s generally prepared/preserved. Because it’s hard to tell how much food a restaurant will actually need, mostly everything is always frozen (which will not taste fresh at all whenever it is finally served). 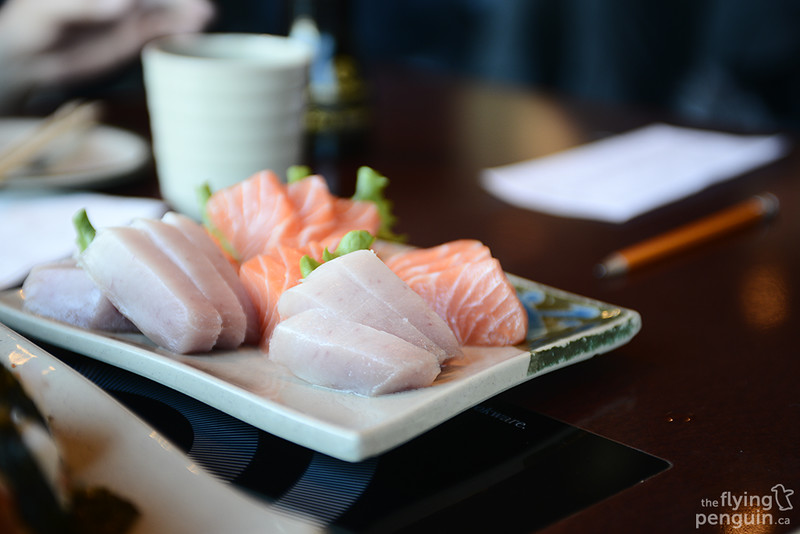 This wasn’t quite the case over at Ninkazu in Richmond. While it was still all you can eat, it is by far MUCH better than what we have over in Alberta (as far as all-you-can-eat sushi goes). 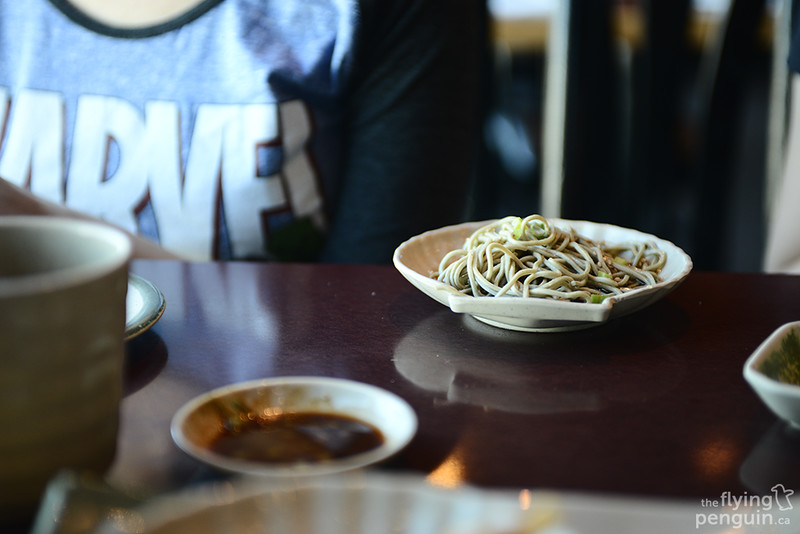 A neat thing I also really enjoyed was all the small “lunch-sized” portions that everything came in. 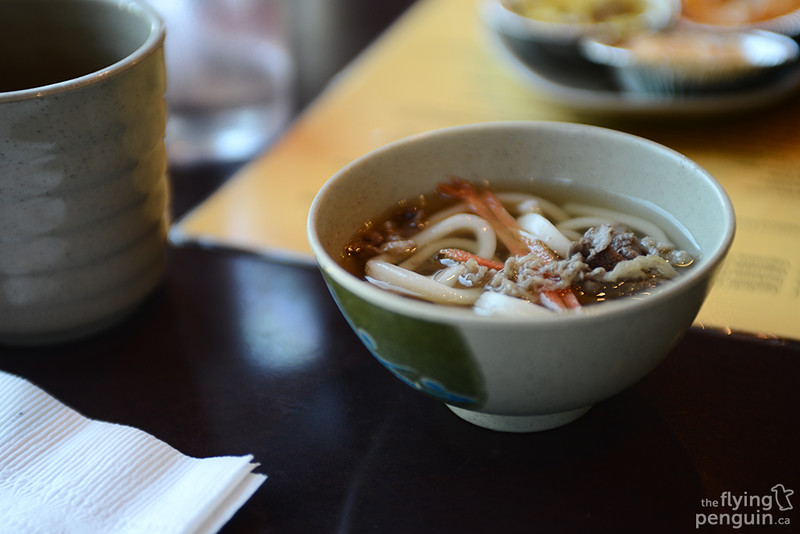 Even though we ordered a fair amount, the small portions that everything came in didn’t make us feel overwhelmed at all and made everything very easy to eat! 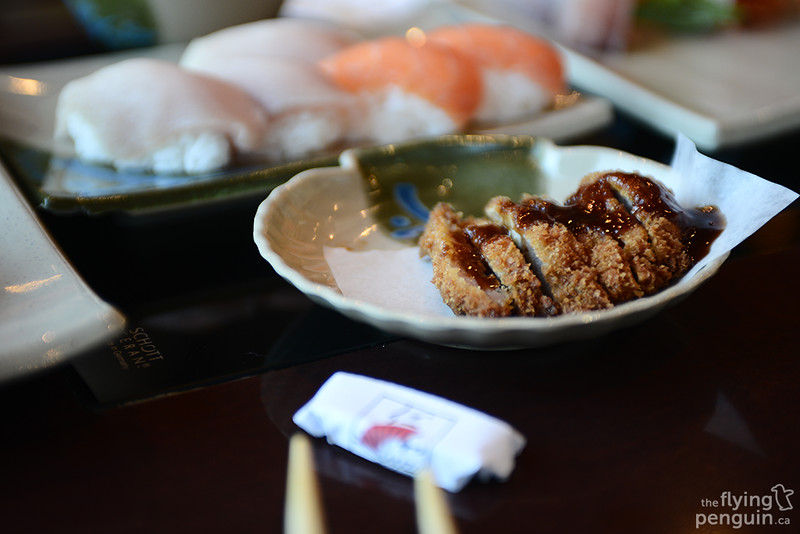 This is also probably one of the best tonkatsu (deep fried pork) that I’ve ever had at a restaurant (this usually takes a very long time to prepare so most places already have it premade, as a result it will lose its freshness just like I was talking about earlier). 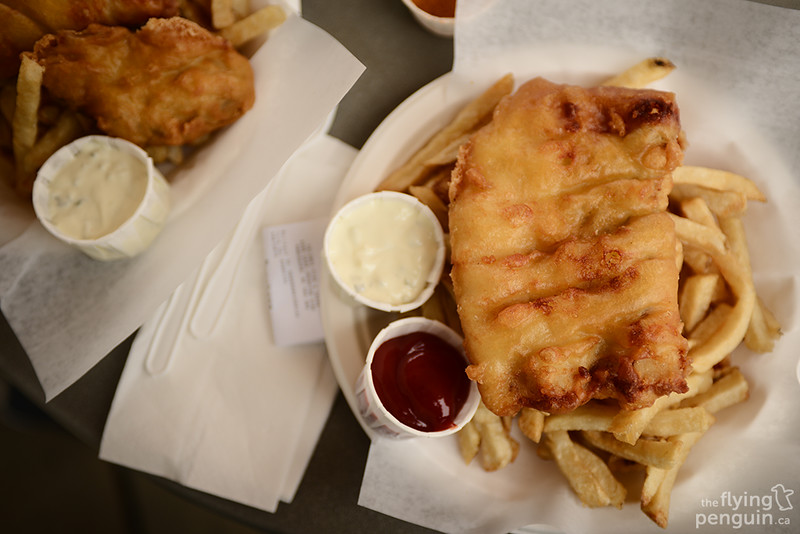 We stopped by Granville Island again so without even thinking twice I got fish and chips (I don’t remember the name of the place I get it at but it’s good!). If you have me on FaceBook then you may have already seen it, but in case you haven’t… 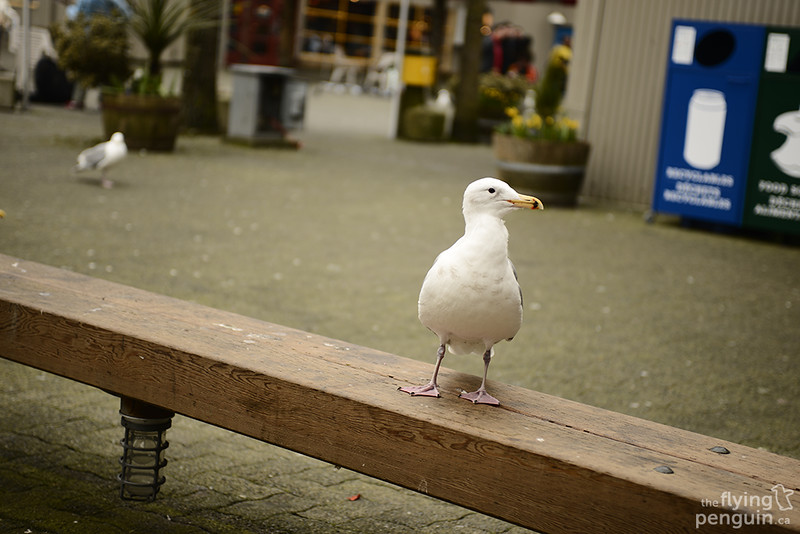 …last year while at Granville Island I made a point to NOT feed the seagulls for a couple of very good reasons: 1) the birds start depending on people feeding them (which many people do) or go scavenging for scraps (usually consisting of fish and chips) which disrupts their natural feeding habits and makes them incredible obese, and 2) as it turns out, you’ll get that one brave seagull that isn’t afraid to go up to a human being and attacks them for their food (yes you read that correctly – I got attacked by a seagull). So as a friendly reminder from FlyingPenguin, please do NOT feed the birds! 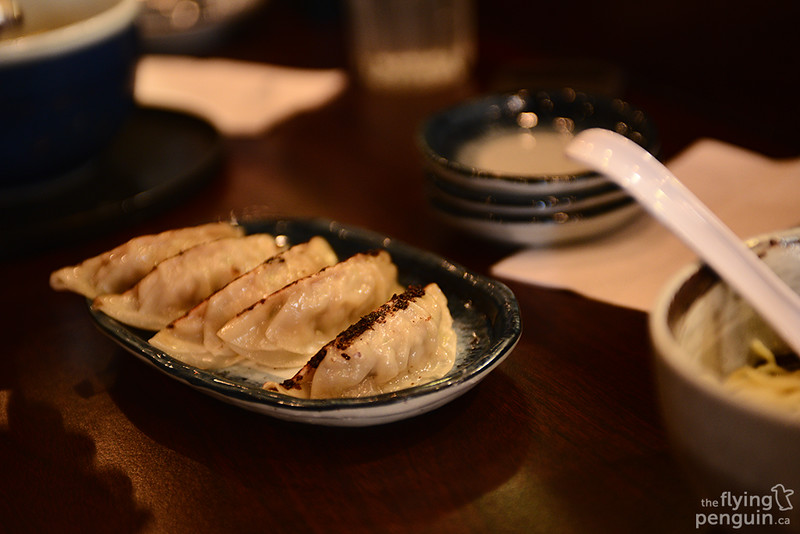 Lastly on the menu is another recommendation by my good friend who suggested the green tea flavoured egg waffles: Santouka Ramen. 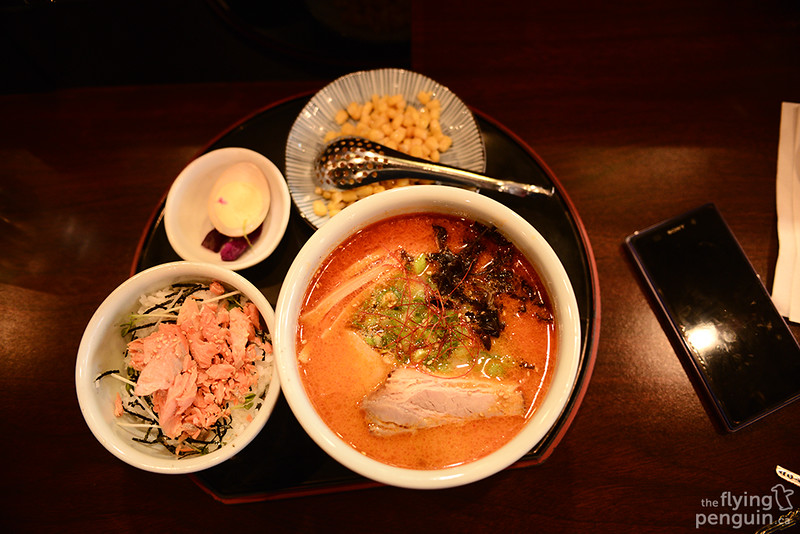 I think the picture speaks for itself here; it was absolutely oishii! 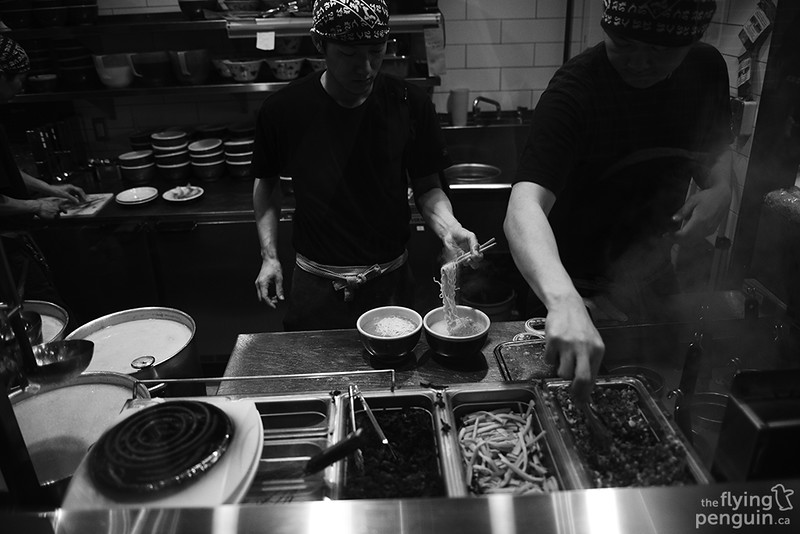 Santouka Ramen, originally from Asahikawa, Hokkaido, has been around since 1988, so they unquestionably know that they’re doing. They are actually rated as one of the top ramen shops in the Vancouver area! If you’re in area (and enjoy a delicious bowl of noodles), definitely make sure to drop by and check them out (as a heads up it’s not a very big place and is usually very busy)! 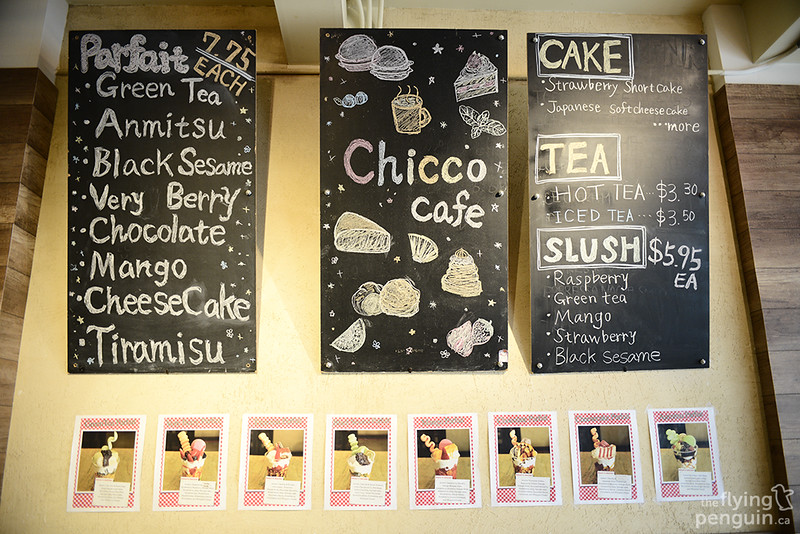 I think it’s only fitting to finish off this post with dessert, so just a block away from Santouka Ramen was another Japanese place by the name of Chicco Cafe… 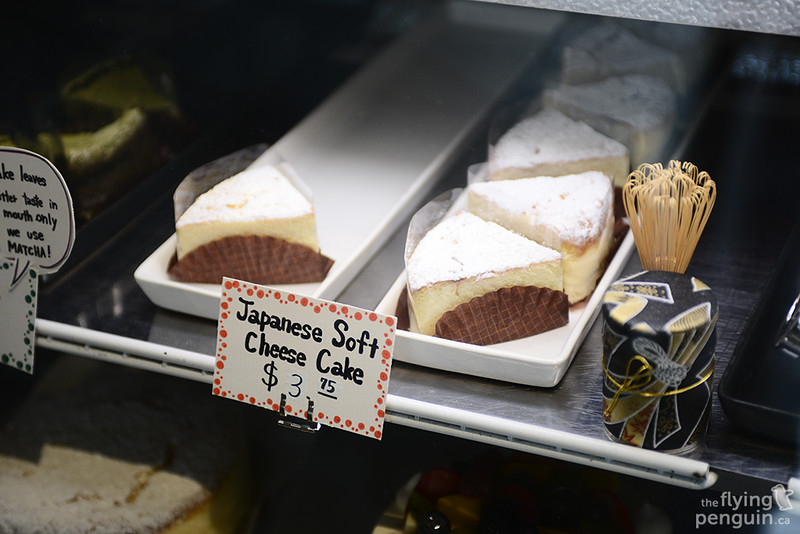 …which specializes in Japanese deserts! 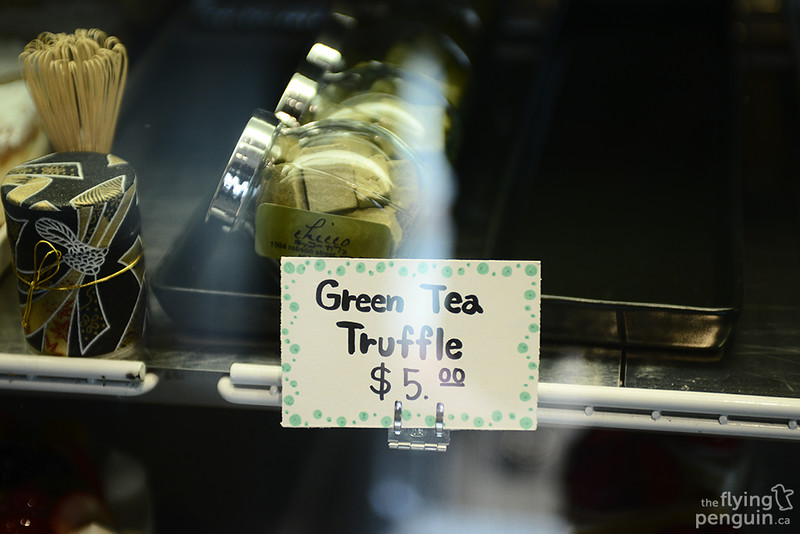 This was yet another recommendation by my good friend, and after enjoying the egg waffles and ramen from earlier, I knew that this stopping by Chicco was a no-brainer. 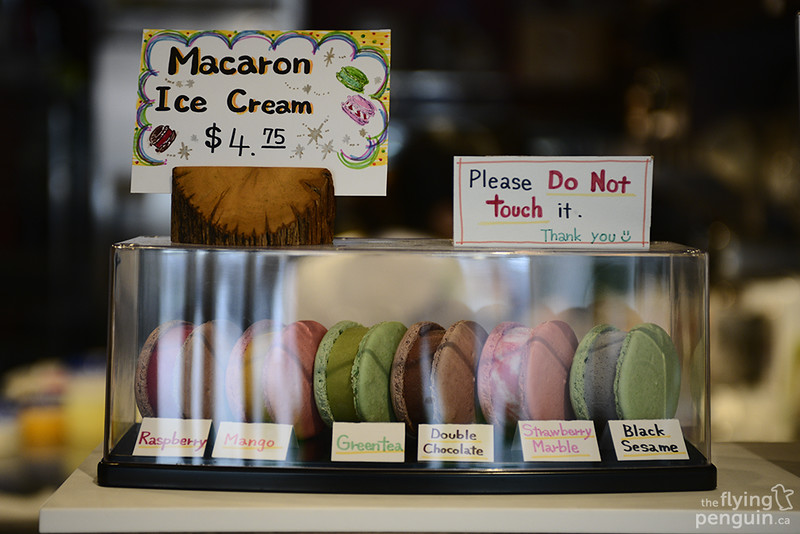 There was a lot of mouthwatering treats to choose from… 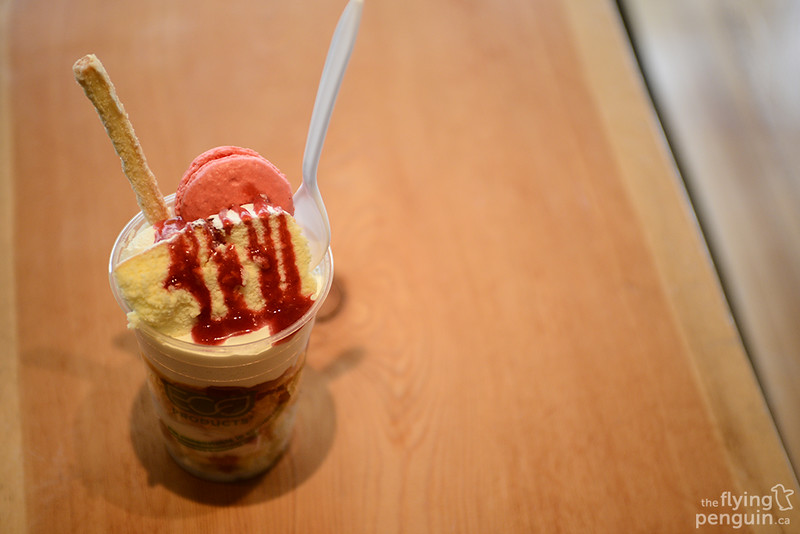 …but in the end I settled for one of their Japanese parfaits! I should probably note that this is not your average parfait (it is absolutely JAM-PACKED with tasty ingredients) and that they are cash only, something that I will have to make sure I have more of next time I’m there so that I can eat everything!