Welcome to the Edmonton Comic & Entertainment Expo, the biggest anime/comic/everything awesome convention in the city.

Although the event itself isn’t new, this is the first time that the expo has come to Edmonton. Besides all the different vendors, the show featured many celebrity guests such as Charisma Carpenter (Buffy The vampire Slayer, Angel), Lee Majors (Six Million Dollar Man), Burt Ward (Batman), Billy Dee Williams (Star Was Episode V and VI), and many more. Adam West (Batman) was also supposed to attend, but had to cancel last minute due to back injury (this was his first show that he’s ever had to cancel).

With so much to see and spend your money on, let’s get right into it.

There certainly wasn’t a shortage of comic books for sale, with many, if not all of them, dating back to when our beloved super heroes of today were just getting started!

Something I miss seeing on comic books would have to be the holographic covers (or in this case, collectable cards). You just don’t see these around anymore! Thankfully, many people have saved and preserved their original comics, with most of them ready for their next owners to read or even set on display.

You’ll always find a large assortment of plushies for sale of your favourite characters, from this Totoro backpack…

…right down to a full Pedo Bear hoodie! Probably wouldn’t want to wear that everywhere though, even if it is just a happy looking bear.

One thing I saw almost every second person holding was a Minecraft tool, whether it was the short or pick-axe. Which one would you choose?

I’m sure that many of you will recognize this.

A very mean looking Darth Maul figurine, but why no double sided lightsaber?!

How about a cup of coffee from Superman in the morning to start your day?

Considering the end of 2012 is almost here, I guess we’d might as well get ready…

There was certainly lots to see of all sorts of variety. Chances are, there’d be something for you too!

Old school Transformer figures, awesome. It definitely brought back memories seeing some of these as I used to own them as a kid, while others I always wished for.

I`m sure alot of us had Hot Wheels cars when we were kids. One that I have never seen before however…

…was this Mystery car! Could you imagine being a collector and owning that but never opening it?

Not everything at the show was on sale however. RavenousEFX was present with lots of authentic movie props and costumes, like this full sized Alien. Awesome.

How about this outfit worn by Milla Jovovich from Resident Evil Apocalypse?

Although Jordana Brewster is known primarily for her role in The Fast And The Furious franchise, she actually also had a part in The Texas Chainsaw Massacre: The Beginning.

Anyone who knows me knows that I’m a big Silent Hill fan, so seeing Cybil Bennet’s uniform (played and worn by Laurie Holden) was quite a surprise, however…

…it was one of the nurse uniforms used from the 2006 movie that really did it for me. I can hear them walking towards me already…

Not everything from RavenousEFX were from horror movies however, as they had this life jacket used from the Titanic movie on display. Pretty cool!

I thought this was pretty neat.Jjerseys of your favourite characters and/or teams, but rather than from sports, it’s of course from comics.

Quite the collection of video games, for consoles ranging from Super Nintendo’s to the PlayStation.

I didn’t even know that there was a StarCraft game available for N64.

I remember owning this very movie on VHS when I was a kid. Feels just like yesterday. 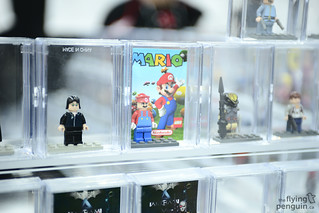 There were also a bunch of neat custom Lego characters on sale, from Mario to Ozzy Osbourne…

…to your favourite characters from Big Bang Theory…

…and this very cool looking Wall-E, now owned by yours truly.

They even had this Lego Vintage Minifigure Collection, showcasing some of the more popular Lego characters over the years. Lego has certainly come a long ways!

Stay tuned for the second part from The Edmonton Expo when we look at one of the biggest things people come to events like this for, the cosplayers!

Part TWO of The Edmonton Expo.

Part THREE of The Edmonton Expo.

Photos from @midnightrevup now up on the site 🎶
Photos from @drivenshow Edmonton now up on the site✌️
Allegedly making progress. #s13 #k24 #niisan
Can't wait for this thing to be finished next month so that it can be grouped in with cars rolling on steelies.
Some rather aggressive aerodynamic details on the 2019 MOTUL AUTECH GT500 GT-R. Interested to see how the new GT500 Z model will fair this weekend at Okayama. New season kicks off in a couple hours!
おつかれさまでした。