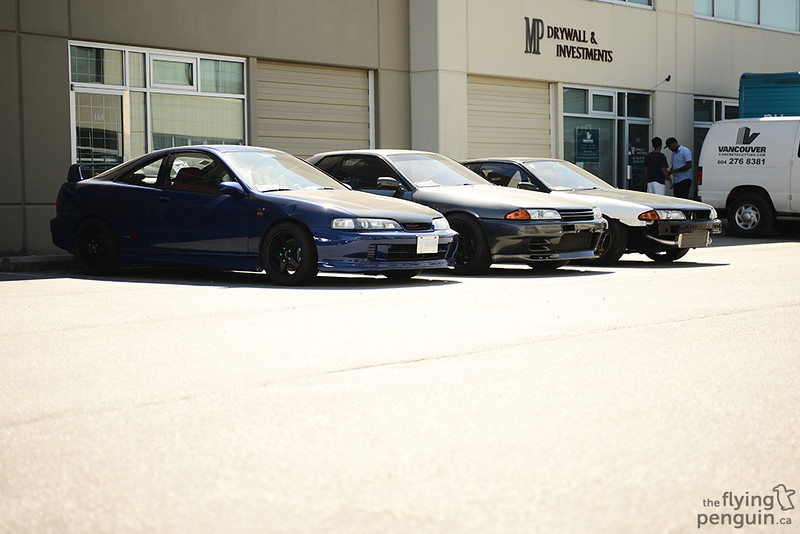 The car tuning scene is huge, there’s no denying it. You’ll find it pretty much anywhere in the world, each place with its own unique style and flavor. With a car essentially being a blank canvas, the possibilities are endless. While I was in Vancouver this past summer, I decided to pay a visit to A&J Racing in Richmond, BC to find out a little more about the cars and the people behind them. 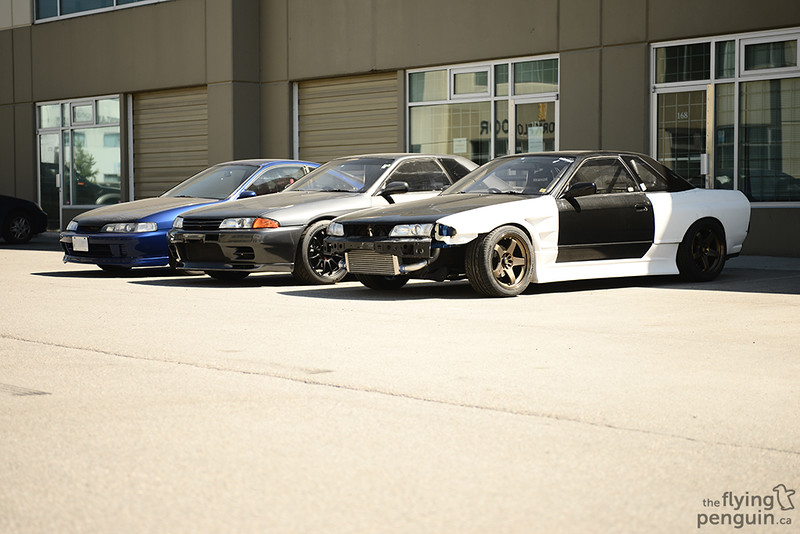 A&J Racing is one of the more old school shops that have been around for a long time with plenty of both tuning and racing experience behind them. 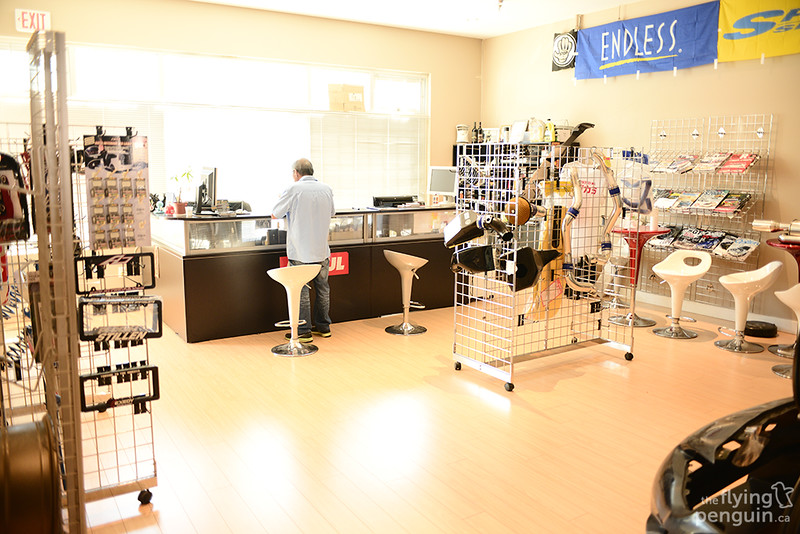 Just take a step inside into their showroom… 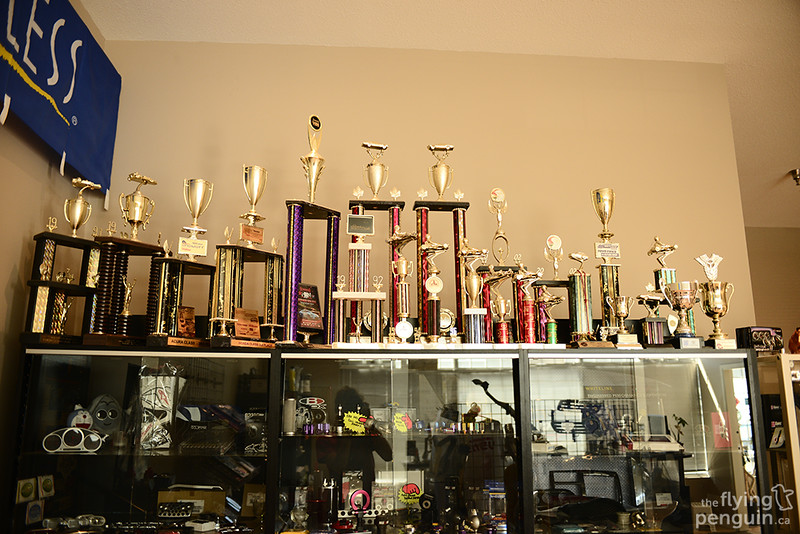 …and you’ll quickly find evidence of that. 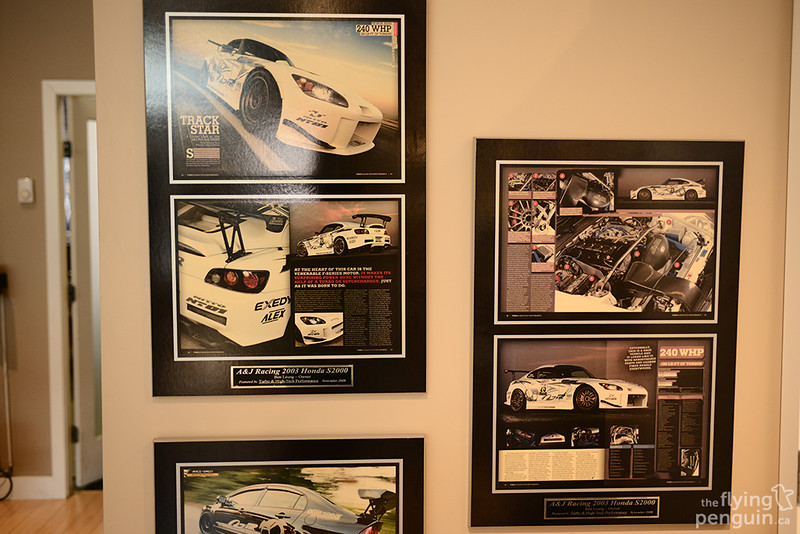 Their old fully NA power S2000 was not only the fastest naturally aspirated car at the Super Lap Battle in Long Beach back in 2008, but it also took home first place the year prior, and also placed first and second place at the Super Street Time Attack Challenge in 2006 and 2007 respectively. Yup, they defiantly know what they’re doing! 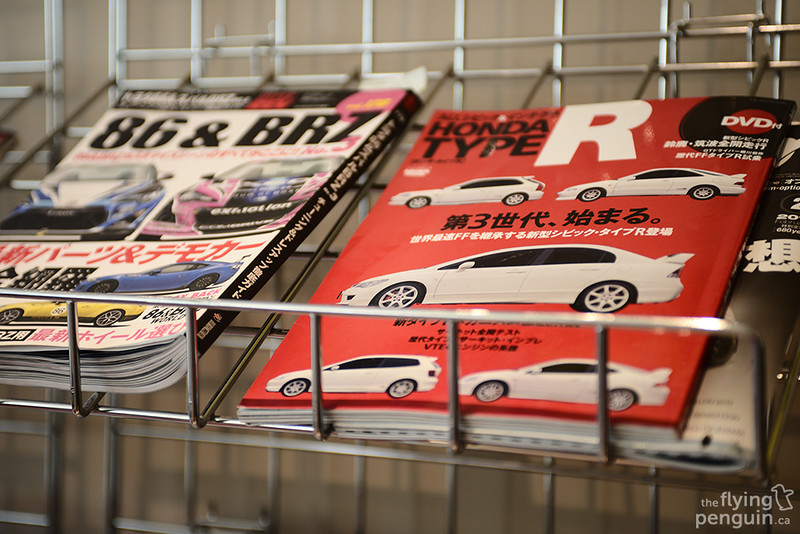 Without a doubt I was like a kid in a candy store, as tuning shops are a bit of a rarity over here in the Edmonton area. 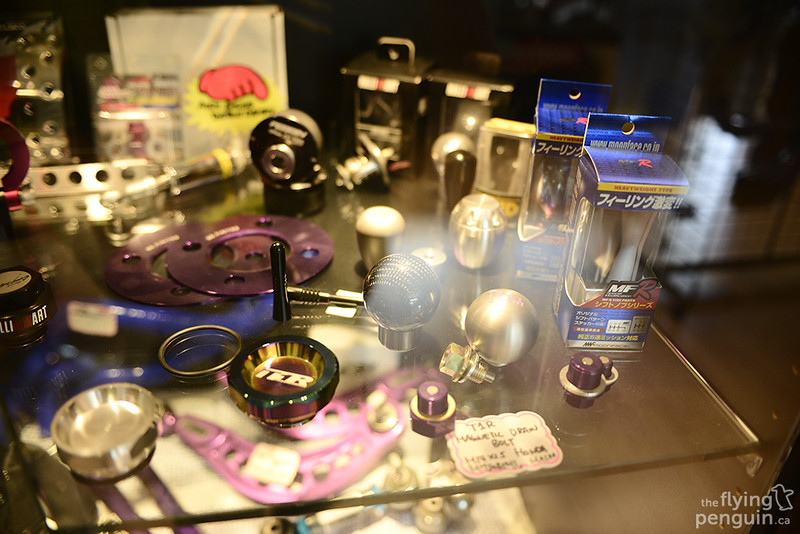 There were plenty of goodies to gaze my eyes upon that you don’t usually see, such as the MOONFACE aluminum shift knobs seen here on the right. 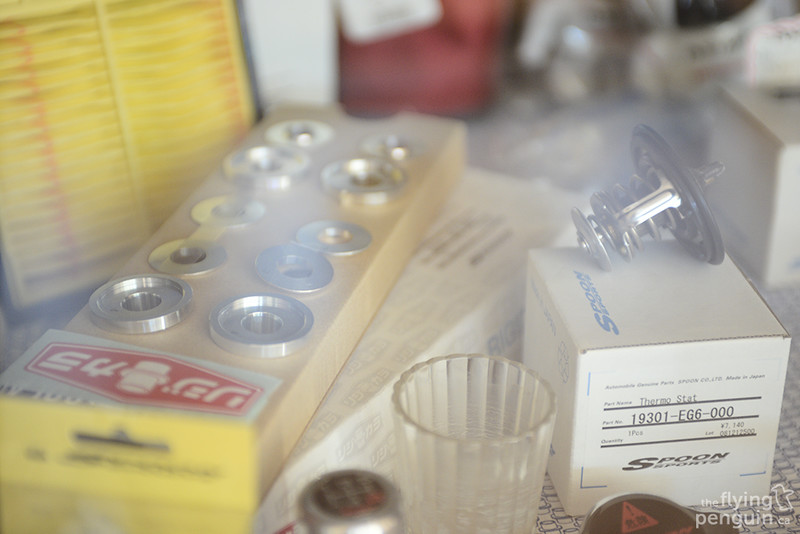 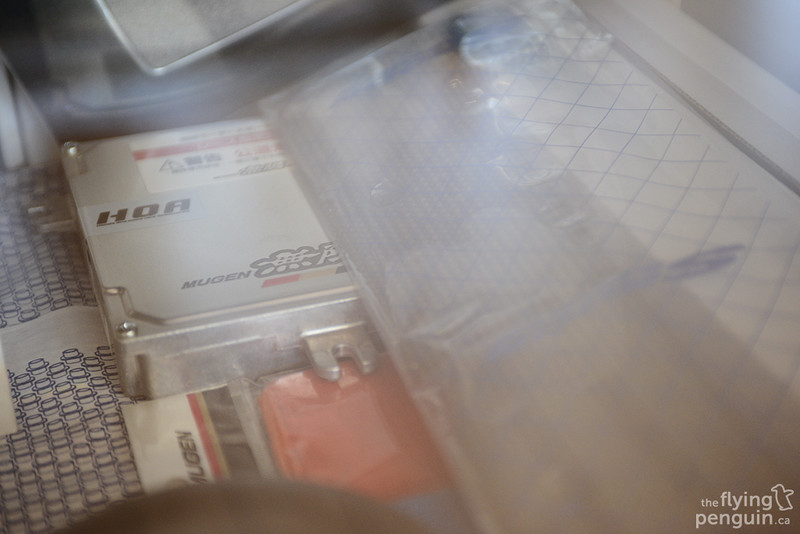 I can’t even begin to imagine how rare that Mugen ECU is. 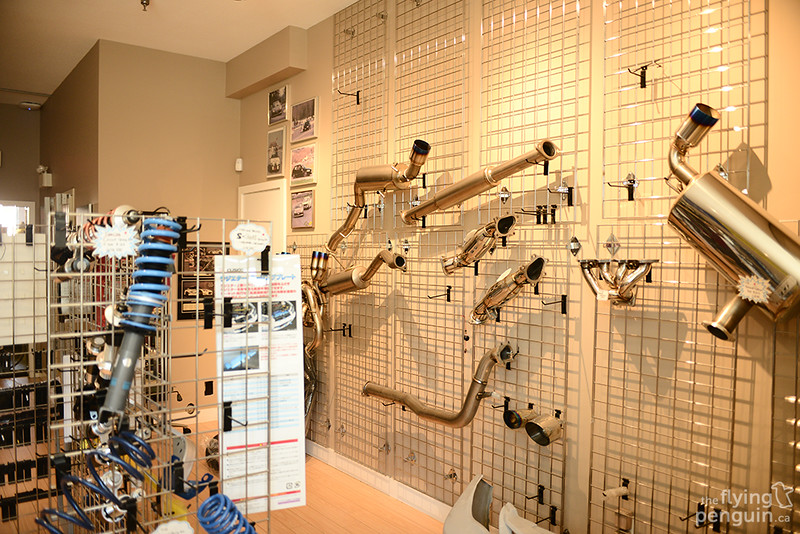 A&J is pretty much a one stop shop, as they do everything in-house from aero, interior upgrades, power adders… 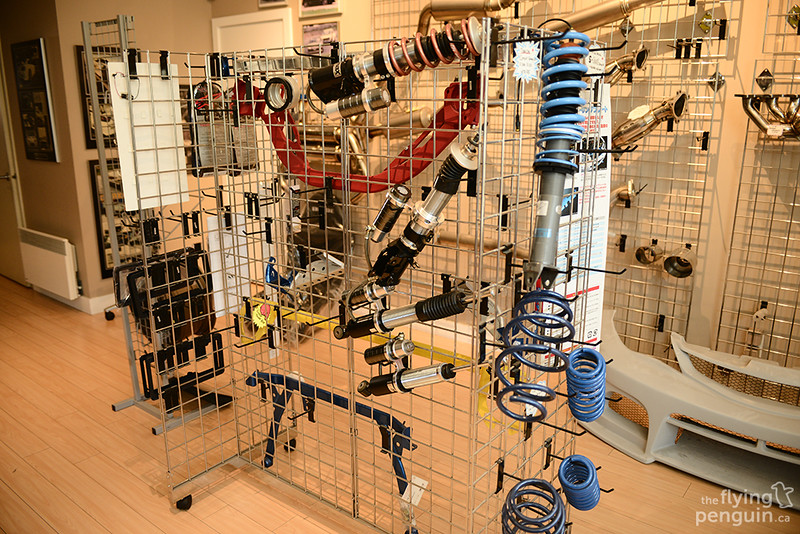 …to suspension tuning. They even offer custom alignments and corner balancing! 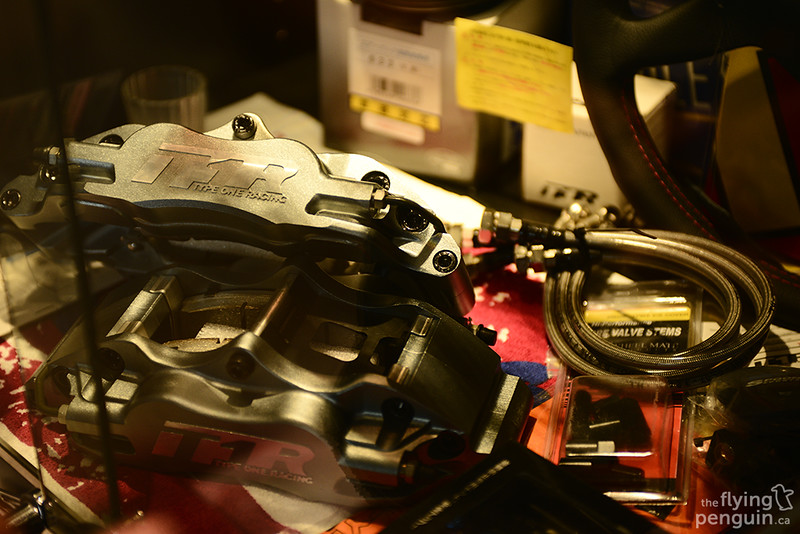 A&J is also home to Type One Racing (T1R), so you can find plenty of their products here like this big brake kit. 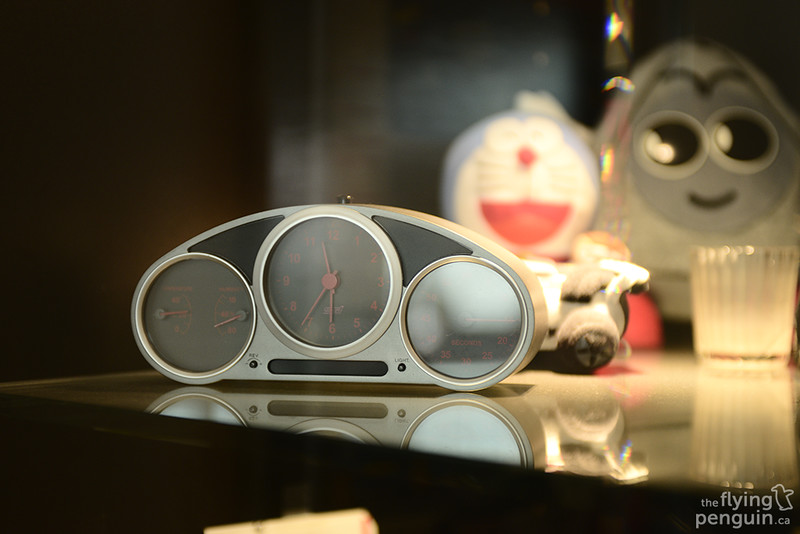 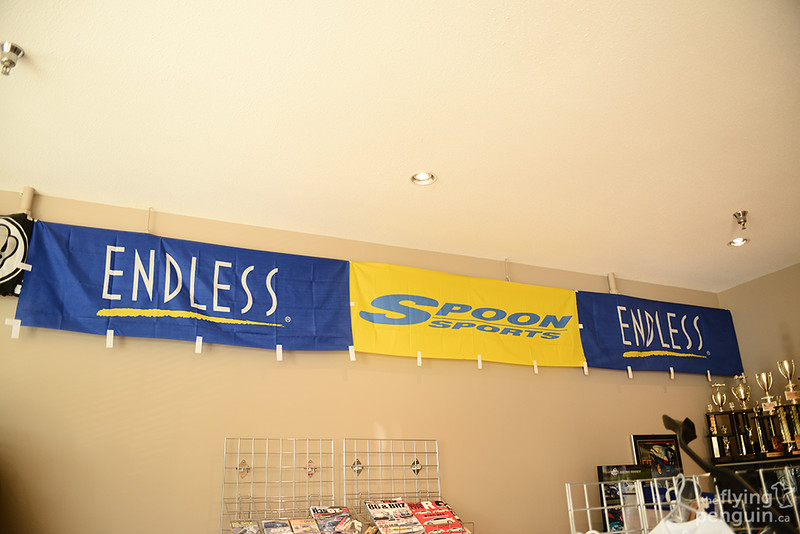 …and neither were any of the cool banners on the wall! 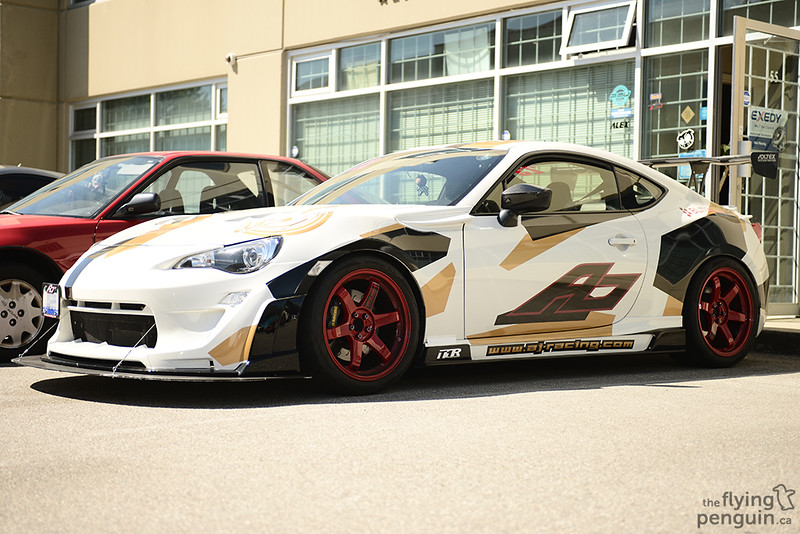 One of the first things to greet me upon my arrival was the A&J Racing BRZ, without a doubt a serious looking machine that spends quite a bit of time on the track. I’m also really digging the Arise Sports Class A Kit (sorry Rocket Bunny fans)! 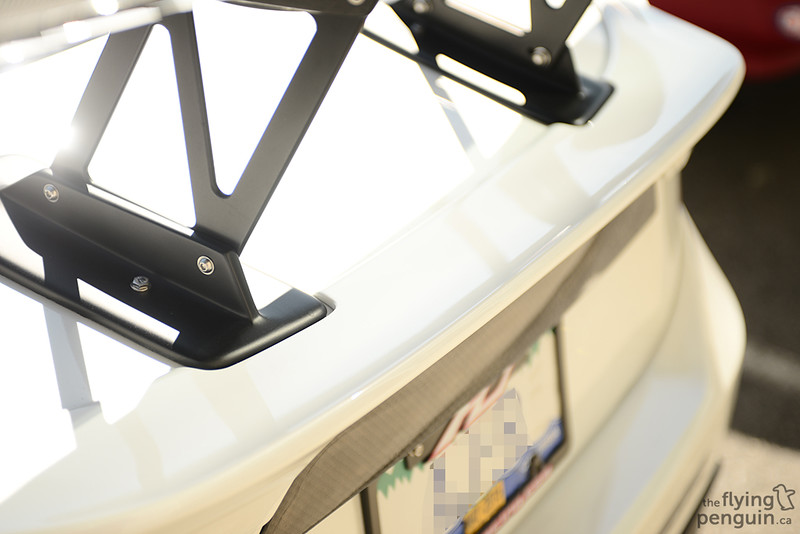 Besides being a Subaru but rocking a Spoon Sports carbon bucket seat, one of my favourite things about this car is how they cut away at the TRD rear spoiler to fit that massive Voltex wing on the back. 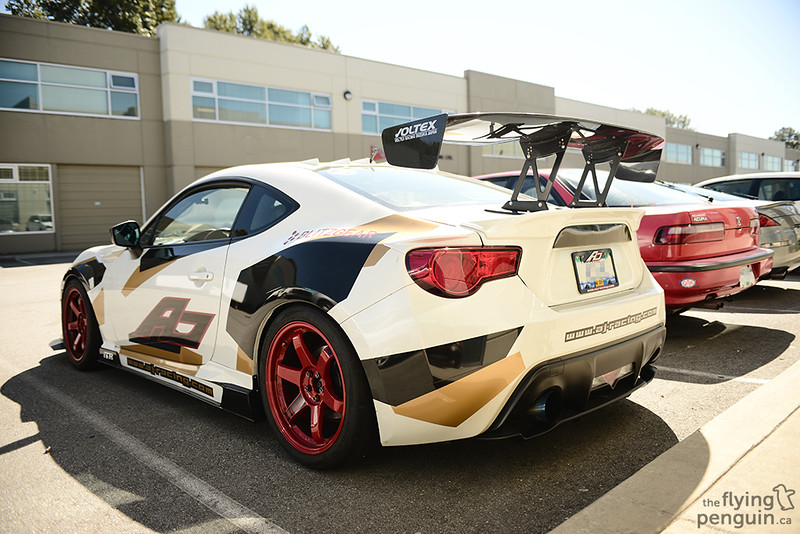 Another thing that I really enjoy about this car is that it’s still naturally aspirated, whereas a lot of FRS/BRZ guys have been going the forced induction route. Don’t let that and the flashy exterior fool you however, as this car posted the fasted time (1:58.820) amongst all FRS/BRZ entries at last years Global Time Attack Super Lap Battle at Buttonwillow Raceway. 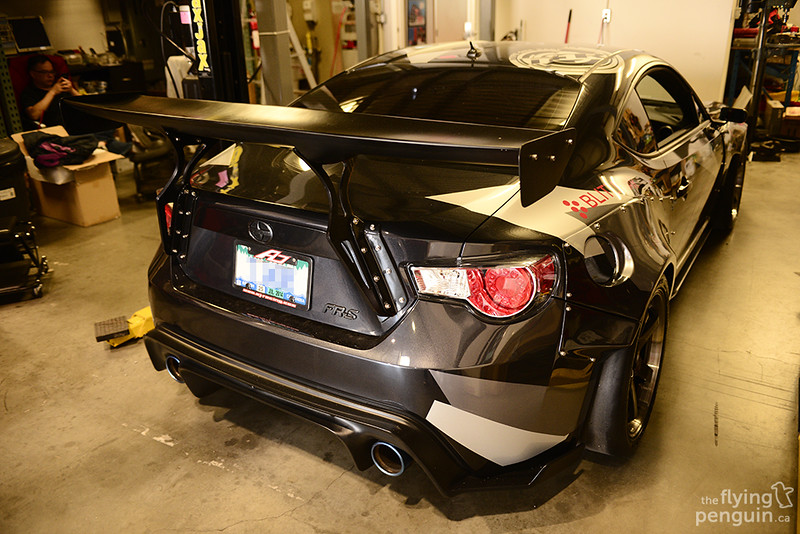 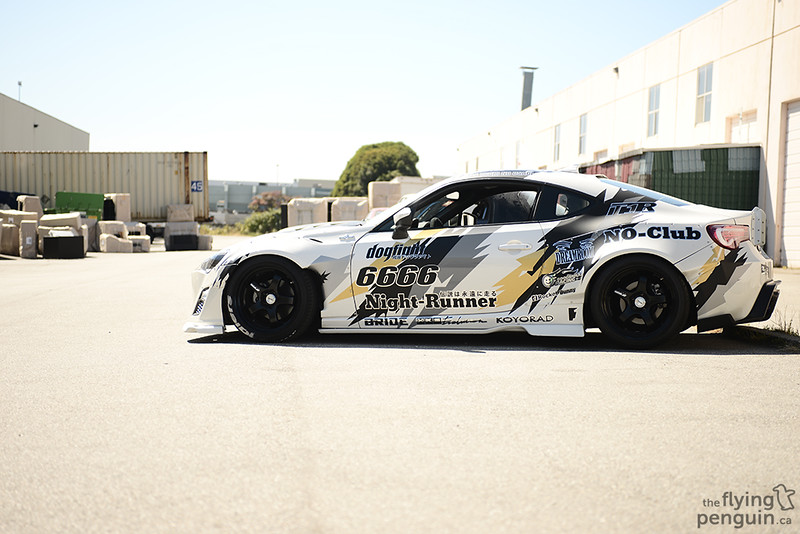 …one of which is Reggie Mah’s which I saw just a few weeks later at the ill.motion Sunday School in Calgary! 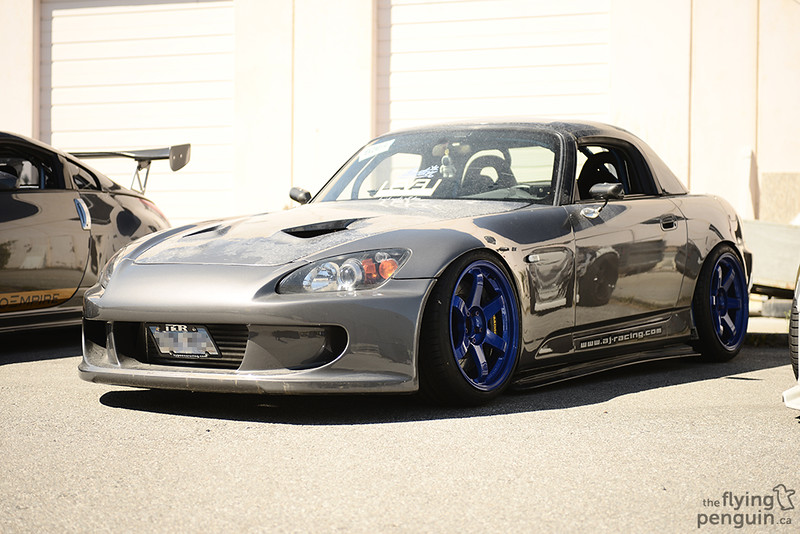 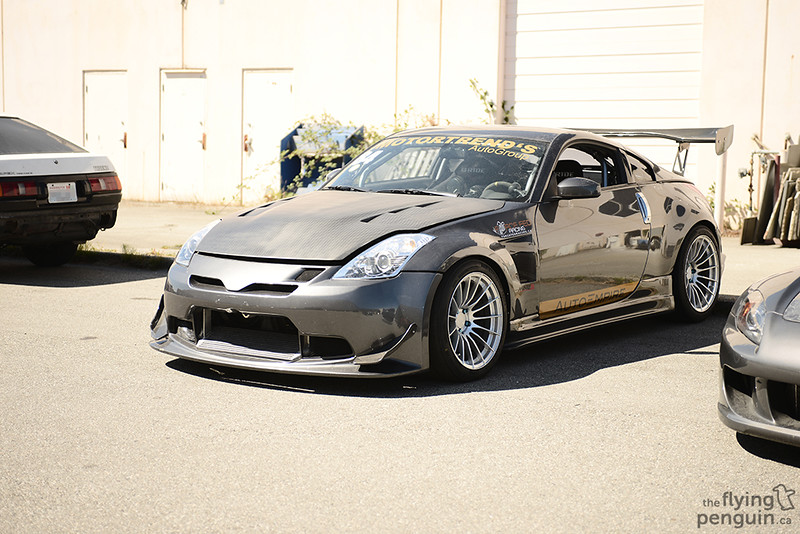 Sitting quietly next to it was this very aggressive looking 350Z, a car we don’t see done up too much these days. 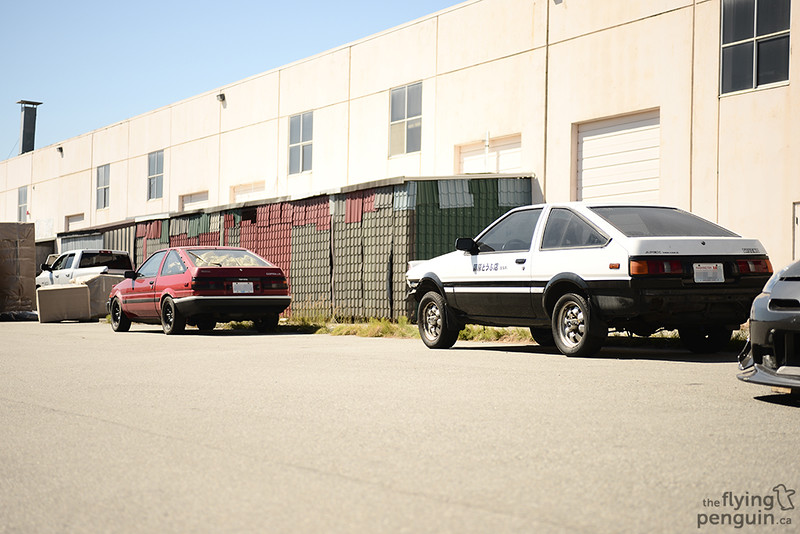 Huh, I guess Takumi delivers all the way to Canada. 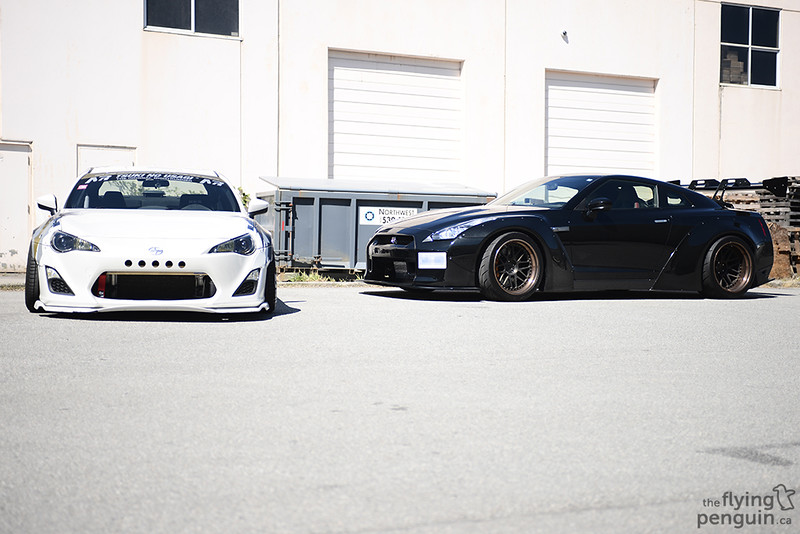 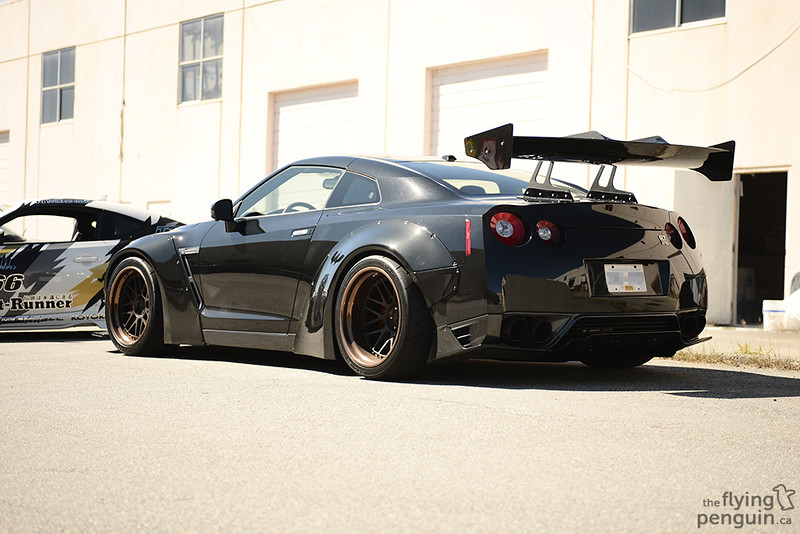 This monster happen to roll up just as I was snapping away at the cars out back. Talk about perfect timing. 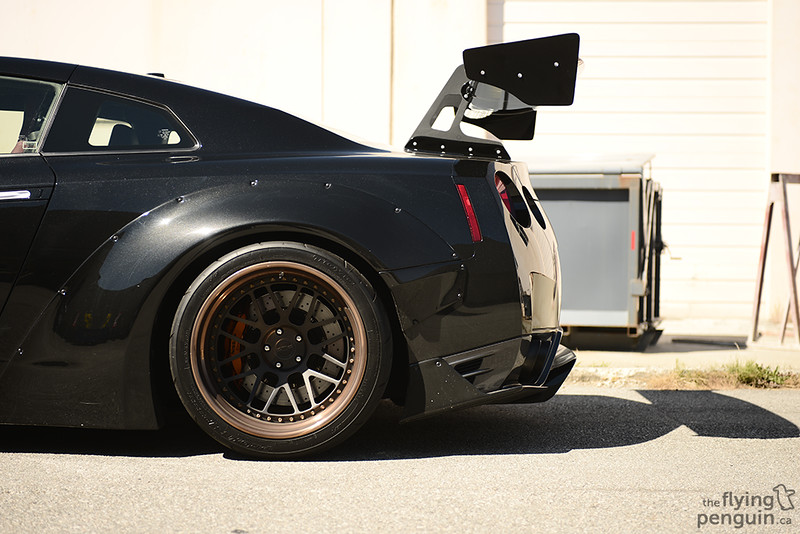 One thing that caught my eye in particular from this kit… 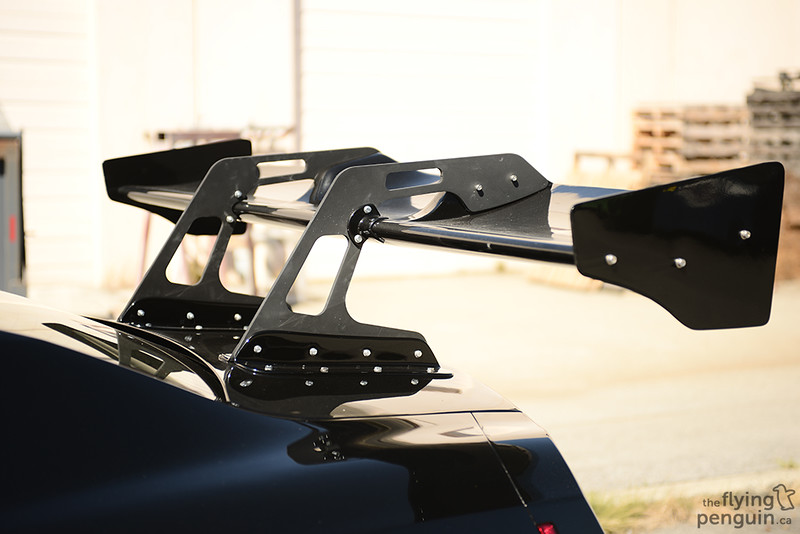 …would have to be this crazy wing design where the mounts are on top of the deck rather than mounted on the bottom. Neato. 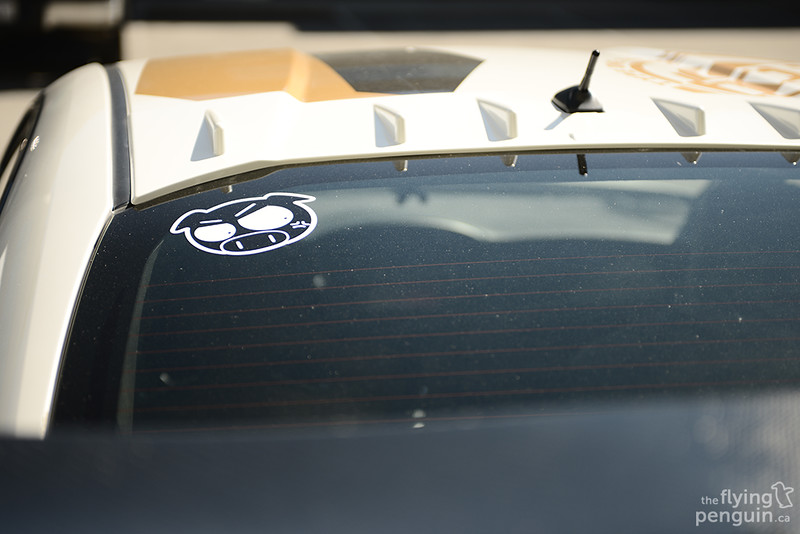 When it comes to making cars look good and go fast, you can count on A&J Racing. They aren’t afraid to try new things either, which is precisely why they sold their S2000 time attack car long ago to move onto new projects. It’s these advancements that lead to their success on the track which is reflected in the cars that they build for the street, and I can’t wait to see what else comes out of them in the future!